I recently replaced my master bath toilet with a Toto Ultramax II 1.28 GPF (CST604CEFGAT40#01) with a Washlet+ S500E. Everything worked great for about 2 weeks, but for the past day or so the tank fills really slowly. It used to be done filling less than 30 seconds after flushing, now it takes several minutes. The refill/overflow tube seems to be flowing normally, and the washlet pressure didn't seem to change, so I don't think there's an issue with the water supply/pressure. The only change I made to the tank was to replace the flush lever with a different finish, otherwise it's exactly as shipped from the manufacturer. I can't seem to even tell where the water is coming from on the fill valve (tsu81.30-a) to see if there is something interfering with it. I looked for information on how to adjust it, and Toto makes it seem like this valve is not user serviceable. Anyone know how I can troubleshoot this? Do I need to replace the valve? It's only a couple weeks old at this point... 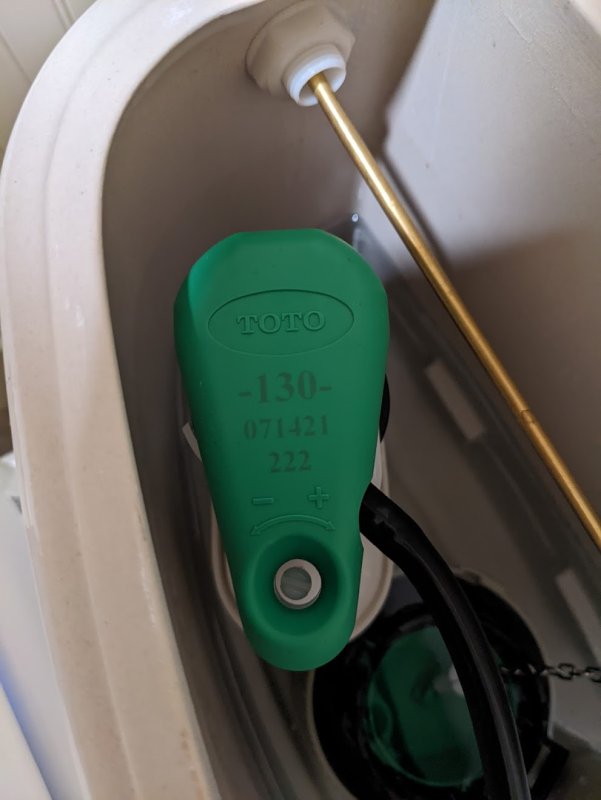 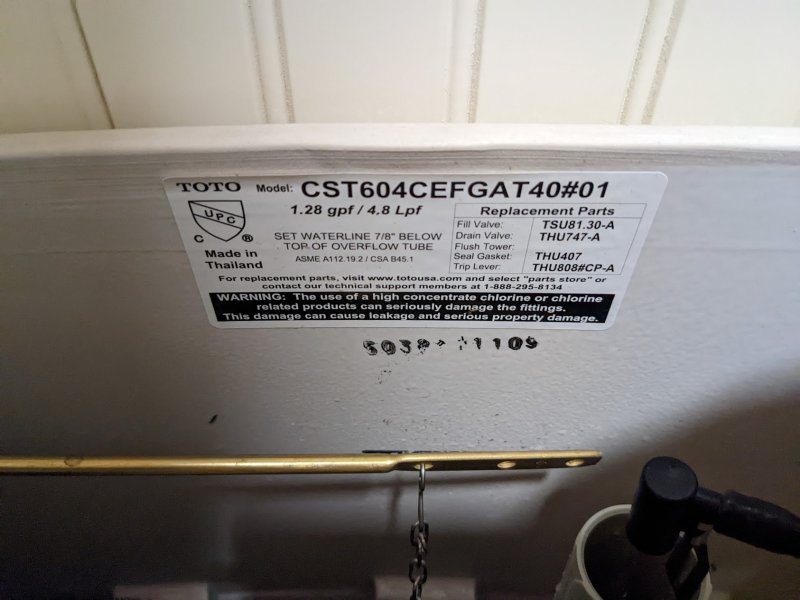 You might check the screen at the bottom of the fill valve. 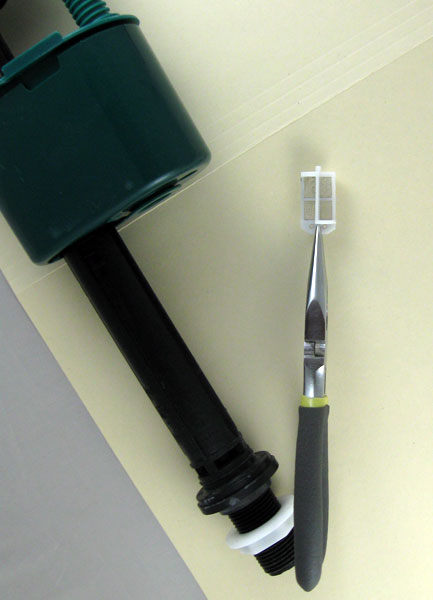 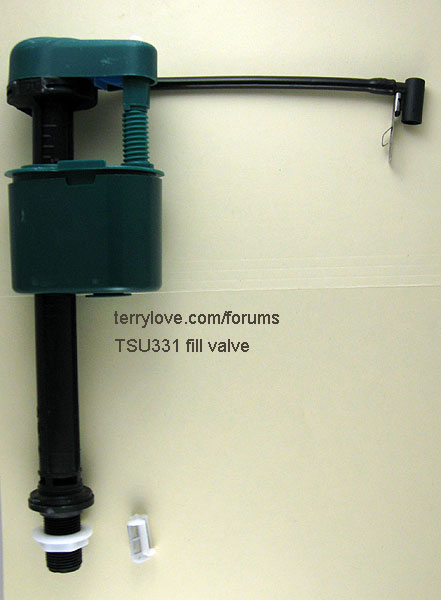 Terry said:
You might check the screen at the bottom of the fill valve.

I'll check that out, thanks. What might have obstructed that screen so early in it's life?

When you do some new plumbing work, sometimes you end up with crud in the lines, so yes, there could be something there. When the water is turned off, the lines partially drained, then turned back on, that inrush of water can dislodge all sorts of curd that may have been on the insides of the pipes. If your town every does some line flushing (often, opening a bunch of fire hydrants), that high flow can make the water cloudy for a few hours afterwards. It's not dangerous, but the brown water gets some concerned, which is why they usually announce it in advance.

Make sure that the shutoff valve is fully opened, and if you didn't replace that valve, if it's a multi-turn one, its washer may have issues, and that's causing a partial line blockage.

Makes sense. I actually had issues with the multi turn supply line valve not fully turning off when I installed the washlet, so it was slowly dribbling into a bucket for a while. Maybe it has also failed to open all the way as you mentioned. I have a quarter turn ball valve sitting here to replace it, but I've been reluctant to do it because my water main shut off is inconveniently located in my crawl space and it's been really hot recently. Guess I'll just bite the bullet and go down there.

Can you shut the water off at the meter? Sometimes that's the easy and best way.

I suppose I could, the city just frowns on that. Guess if I'm quick about it I won't get caught. My setup is a bit unique in that my meter is in my neighbor's front yard right next to his. I'm not sure which is mine and which is his since they don't seem to be labeled. Guess I just hope I guess right and he's not in the middle of a shower if I'm wrong.

The meter might have a little dial that spins when water is being used. Have someone inside open and close a faucet while you watch the meter.

The valve at the meter might need a special tool to operate it. Sometimes, they leak after operating, which is one reason why you might not want to deal with it. The packing doesn't get used much.

If it's not easy to figure out which is which, your water bill often has the previous reading listed on it, unless it's a newer, electronic, remote readout version.

Thanks for the tips, figured it out by turning my sprinklers on and off with the controller app on my phone. It was actually neither of the meters in my neighbor's yard so I'm glad I didn't mess with them. We live at the end of a small cul-de-sac with only a few houses that are uphill from the main road, and for some reason my water meter is actually all the way down on the main road in the yard of the house directly below, whereas the other 3 houses in the cul-de-sac have theirs near their front yards. Takes me about 5 minutes to walk to it, which will be great in an emergency. It was completely covered in dirt and overgrown with plants except for the meter itself. I dug out the valve but wasn't able to turn it with my channel locks or vice grips, couldn't get the right angle to grip it. Instead, I hunted around in my crawl space for the shut off valve but couldn't actually find it. The only reason I believe it's down there is because the home inspection report from when we bought the house said it was, though I've never seen it when I've been down there numerous times and there was no picture of it in the inspection report (maybe the inspector didn't find it either and just assumed it was there?). Guess I'll go buy a water meter key from the hardware store and turn it off at the meter tomorrow. How difficult would it be to add a main shutoff valve somewhere near the house to make this easier in the future? I assume I should hire a plumber for that rather than do it myself...

Adding a shutoff on the line from the meter to the house is extremely hard. Adding a shutoff inside the home is a better idea, guessing it comes into the crawl space, but you could throw some fittings at it and bring it above the first floor and make it "readily accessible".

Sometimes, they'll put a shutoff in a box near where it enters the house. But, if you can follow where it comes out of the ground into the house, it may end up going directly to where the water heater is, and a close inspection in that area might find a shutoff.

With the water off, it's not usually all that hard to add a shutoff somewhere. The water needs to be cleared from the line to solder, but you could use a compression fitting. Personally, if possible, I'd put it upstairs so I didn't have to crawl underneath the house if possible.

I was able to turn the water off at the meter with the key and replace the toilet supply valve with the quarter turn ball valve. The rubber gromet/washer in the old valve had broken into pieces, which is probably why it wasn't shutting off all the way. I figured that might have been blocking the flow and the reason the toilet was filling slowly, so I reconnected the toilet but still had the same problem with slow filling. I removed the tank fill valve to look for that little screen Terry showed in the picture above, and I can't seem to find one. The valve in that picture is certainly somewhat different than mine though. I turned on the water supply while it was disconnected to check the flow, and there is definitely good pressure, so it seems everything is good up to the tank fill valve. Is there something I'm missing here, or should I just replace the fill valve?

If you call Toto, they may send you one free.

When you say good pressure, I presume you mean good flow.

Nevermind, just went to the hardware store and got a Korky 528x. Works great, fills very quickly again. Thanks for all the help!

Good deal. For minimum water consumption without hurting flush performance, you can adjust the refill hose flow so that the bowl level reaches max just as the filling stops.
You must log in or register to reply here.

Toilet with more water in the bowl than Toto Ultramax II?