I was at mom's yesterday to replace the flapper on her 15 year old or so American Standard bowl. Last week, I had cleaned the seat with a scrunge to stop phantom flushes and it worked. The old flapper looked shot so I brought a new Korky one. After replacing it, it was reflushing about every 15 minutes. I recleaned the seat, inspected the new Korky and reinstalled. Still leaking - yes there is a bit of chain slack.

I reinstalled the original flapper and it doesn't leak. The original seems much softer but it's likely due to age as the wings to grab the tower are almost gummy and look ready to break.

Is there a better brand of flapper that seems to seal better, or could the seat be the problem even if it looks and feels to be in good shape? I was thinking of putting some waterproof dielectric grease on the surface of the flapper...

I would have tried the exact same procedures..

Try a flapper that says "use on toilets made before 1995".

JohnCT said:
The old flapper looked shot so I brought a new Korky one.
Click to expand...

What Korky model number did you buy?

I don't know if "Korky Plus" is harder or softer than their regular.

Reach4 said:
What Korky model number did you buy?

I don't know if "Korky Plus" is harder or softer than their regular.
Click to expand...

Not sure. I bought them when I had a multi family house and they were bulk packed. They're probably 5 years old or so but were stored in the original plastic bag. They look and even smell like fresh rubber. I have a few more at home - I'll check for numbers tonight.

That number would also tell people if you are looking for a 2-inch or 3-inch flapper. I don't know when 3-inch flappers became common, but there is a good chance yours are 2-inch.

Reach4 said:
That number would also tell people if you are looking for a 2-inch or 3-inch flapper. I don't know when 3-inch flappers became common, but there is a good chance yours are 2-inch.
Click to expand...

I'll check (and measure tonight). By eye, the Korky looks the same size as the one that came out.

Universal is how they maket and sell those. In my opinion they are only universal because they technically fit, but my experience is such that they don't fit well. It's hit or miss with them. I like the black off brand ones at my local true value hardware store they fit American standard much better.

I think tout can go online with your toilet model number and find several brands that should theoretically fit. I would get three one closest to color and style that was original to the toilet. That's been my experience.

Update: I went back last night to find that the original flapper I cleaned and reinstalled (instead of the leaking new one I tried) was really bad causing a flush every ten minutes. FYI, this is a 2" flap valve.

I had a red Korky branded flapper with some sort of adjustable snout on it in my box o' plumbing stuff so I installed that with a thin coating of dielectric grease. Leak gone. 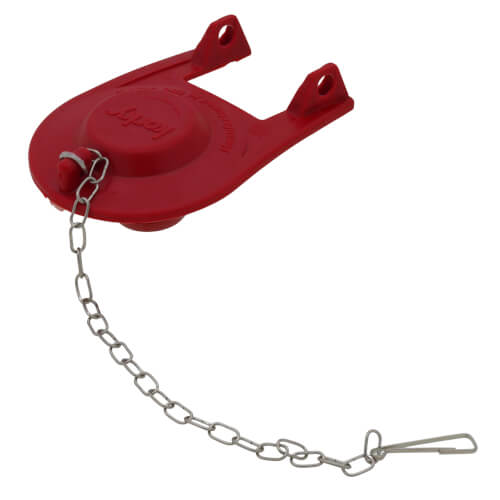 I inspected the first new (black) valve I installed that leaked and that I had thought was a Korky brand. It's not. It has the same mold pattern on the top as a Korky but was actually unmarked. Again, I had bought these contractor bulk for when I had an income property. I had a couple of more at home and looked them over carefully. Each of these knock-offs had a slight warp at the front edge in the same spot. There are no markings of any sort except for the "cut here" on the wings. Since I've had them new in the box for a bunch of years, perhaps they are a little less compliant than they were when they were new and maybe they worked back then.

In any case, the problem is fixed and I tossed out the rest of the knock-off flappers.

John
You must log in or register to reply here.