Hello,
Any suggestions for a wall mounted toilet (bowl+tank) without breaking the bank?
Thank you

I install a lot of the Gerber Maxwell wall hung toilets.
Gerber 20-021 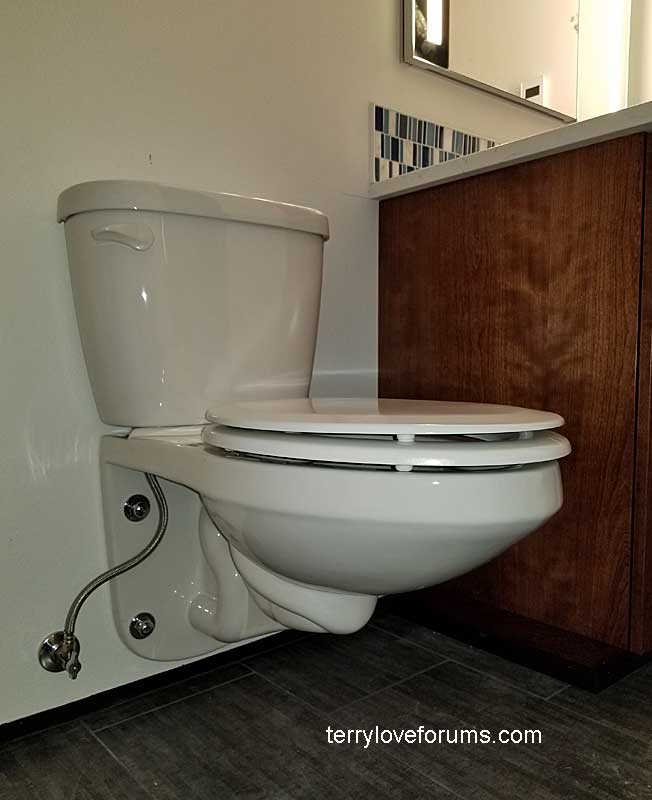 Thank you for answering
I'm looking for a toilet that has a tank built into the wall.

Also would love recommendations. I've seen plenty of complaints about small water surface areas. Floor-mount tanks have plenty of options where you can waste water. But all wall-hungs seems to be dual-flush with tiny water surface areas. Do we only hear about the complaints and in reality they are manageable? Or do you end up with a toilet that is basically a urinal because you end up never wanting to use it for #2?

The wall-mount with the in-wall tank are just different from a regular toilet, so if you want the familiar action of a regular floor-mount toilet, forget it. The one Terry was nice enough to post about operates more like a regular floor-mount. But if you want a schwanky, Euro visual appearance of a wall-mount with in-wall tank, then you have to resign yourself to the fact that they're not gonna behave like a normal toilet.

This is because they're all going to have a flush that dumps whatever amount of water is incoming into the bowl in a big mass -- called a "washdown flush". This is because -- again -- the design with a wall-mount tank is different. All are dual flush. Not all have "tiny" surface areas, but...they're different.

We have 3 in our beach house. All use the Geberit in-wall tank. At another location we have the Toto tank. All the bowls from Duravit and Toto will work on either manufacturer's in-wall tank -- interchangeable. I can't really tell the difference between the two tanks. We have two Toto bowls now and one Duravit. It was previously the other way around, but when a Duravit cracked, I replaced it with a Toto because I hated it. The Toto Aquia wall-hung is the most-normal of the bunch, and I like it. It's more-familiar in its operation, and has a larger surface area of water. When you look in it, it doesn't seem weird.

Toto no longer seems to have a wall-hung that they call the Aquia bowl; I'm sure one of their dumb new names applies to what used to be the Aquia, and I'm sure Terry knows. Toto likes to change the names of successful US TOTO products to dumb names they use elsewhere, like when they changed the very-familiar CEFIONTECT trademark to CeFIonTeCT with the weird capitalization (that they finally eliminated and now use all caps), just because that was their brand in the rest of the world. Stupid.

[/RANT on:] I wouldn't put anything but a Toto in our home, because it's the best. It has been the best for a long time, and it was the first to produce a 1.6 gpf toilet that actually worked. It's among the biggest plumbing manufacturers in the world. But their absolute-incompetence in marketing to Americans is why, after 15 years, the people who know about Toto are still mostly people in the business. It is why, despite the unimaginable superiority of the Washlet over toilet paper, especially for older people or those with certain conditions, the penetration of the device in the US is peanuts. Toto's marketing just plain sucks. Even though they have a huge plant and a huge office in the US, their marketing perspective is still waaaaay to Japanesey, and the masters back home, who put out a single Washlet commercial in Japan 40 years ago that is legendary in the advertising business and made the product EXPLODE in Japan, absolutely-refuse to even try to understand the opportunity that they are missing. How is it that we just went through the biggest home toilet paper shortage EVER in the United States, and Toto did NOTHING to capitalize on that? Grrrr....[/RANT off]

If you MUST have a wall-hung, I would have a serious look at whatever they call the Aquia now.
Last edited: Feb 20, 2021

Thanks. Yes, the Toto EP is the new Aquia. The AP is the new Maris, somewhat, but the old Maris and old Aquia had different water surface areas etc. and the new AP and EP appear to be basically identical other than bowl appearance (and, well, male "clearance" when sitting). We settled on the Toto AP for looks as well as because, for wall-hung, they seem to have the highest guarantee of acceptable flushing I could find.

I've done a lot of research etc., it's just hard to find how annoying it really is. We don't have to have a wall hung, but are being strongly pushed for it. Trying to figure out if we are sacrificing usability for looks or the tradeoff really isn't that bad. I know it's person dependent. They seem rather polarizing.

Or we'll just use one of the floor-mounted Totos that Terry is recommending. Wish there were more real life reviews other than people either saying "Haven't installed it yet--looks great though!" or "This toilet is the worst. It has a ledge right by the outlet and you have to clean it after every use". I feel like most people's experience must be somewhere in the middle.

I've installed dozens of in wall tank carrier mounted toilets and have never heard any complaints.. I don't have one myself, but wouldn't hesitate to install one. I would likely go with a Toto neorest or washlet ready just because I really like the bidet features now.

There is a brand Swiss Madison that my GFs mother provided that we installed in their master bathroom that was the least expensive. I was hesitant to install a brand I was unfamiliar with, but its been several months and I've never been called to fix it or heard any complaints.

corsair said:
I've done a lot of research etc., it's just hard to find how annoying it really is. We don't have to have a wall hung, but are being strongly pushed for it. Trying to figure out if we are sacrificing usability for looks or the tradeoff really isn't that bad. I know it's person dependent. They seem rather polarizing.
Click to expand...

That would make it easier for your robot vacuum cleaner or other cleaning method.
You must log in or register to reply here.

Replacing a floor-mounted toilet with a wall-hung toilet