Hello and Happy New Year! I am looking at plumbing 4 bathrooms (2 back to back on two floors right on top of each other). Please see attached sketch and leave me any comments you might see regarding connections or anything that you might notice wrong in the diagram. Also do I need a vent stack or could I tie in a 2" vent from the first floor with a 2" vent from the second floor and connect at top of the soil stack. I tried to fit everything in the 1st floor joist as the basement ceiling is low and the area under the bathrooms has a walkout area leading to the door. Thank you very much. I appreciate your comments.

Which plumbing code are you under? UPC or IPC which will play into how your 2nd floor toilets are vented. They would be OK in UPC under horizontal wet venting if the sinks were their wet vent. But not if their showers are since they're required to be the most downstream fixture. I'm unsure of IPC rules for venting / wet venting toilets. But a look at the Up.Codes looks like if the sinks were the dry vent then you could elimiate the vents from each shower and use the sinks vents to vent the entire bathroom group. I don't see a requirement that toilets be most downstream fixture, but that only 1 fixture can vent upstream of the dry vent fixture. Each bathroom would have to be kept separate as you have drawn. The 1st floor vanities could be a single riser with a fixture cross serving both sinks similar to how the showers on the same floor are drawn. Other layout looks good to me.

Thank you for the feedback I had hard time getting back to the website as I forgot the password and I couldn't reset it. I am under IPC. The vanities on the second floor will wet vent the toilets and showers will have their own vents. I am wary of the fixture crossing as for cleaning purposes in the future I don't want the snake to cross over to another sink or is that only possible with double Santee? Does fixture crossing allow for venting as well?

I think that's a reasonable reason to keep them separated. I don't have enough experience with drain cleaning to say definitively that a fixture cross will allow a snake to pass downward every time its introduced. A single one off job doesn't have to be the most efficient, that's just how I design plumbing projects to maximize profitability for my crew. It also ensures that if one sink is clogged the other is less likely to be.

Got it. Thank you for your input. Is it possible to eliminate vent stack and do it as shown below. 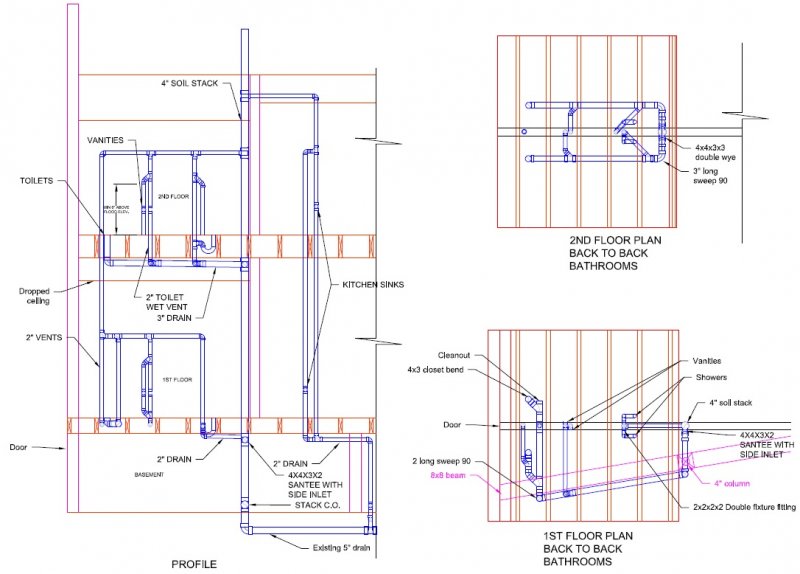 I'm not familiar with NY code, but I thought I read that as a requirement.

Is this New York state, under the IPC, or NYC, which might have different requirements?

I only glanced at the first drawing, but looked more closely at the second drawing. Seems like the second drawing doesn't eliminate the vent stack, it just moves it farther away from the soil stack. A few more comments based on the IPC, some of which may duplicate Tuttle's:

- On the upstairs showers, I assume you dry vented them rather than wet vent them, as the latter would require dropping the traps to line up with horizontal drain under the joists, which would make the bottom of the trap extend lower than the horizontal drain. You could consider running each shower trap arm through the joist directly to the soil stack, as nothing would be draining in above them, so the stack could vent the shower trap arms. Either via stacked san-tees, so the two traps would be at different heights, or with a 4x4x2x2 sanitary tee with sanitary side inlet, if such a thing exists.

-If you're concerned about the 2x2x2x2 double fixture fitting for the lower showers, you could certainly plumb them with separate san-tees like you show the upper showers.

I am falling under NYC IPC. The second floor showers are dry vented. Thank you for the recommendation regarding venting the second floor showers using the soil stack/ stack vent. Would I have to use a double santee to achieve that with bends in the shower trap arms or would it be ok to stack the santees on top of each other. I guess its allowed to use the stack vent to vent fixtures from the same floor.

KamilB said:
Would I have to use a double santee to achieve that with bends in the shower trap arms or would it be ok to stack the santees on top of each other. I guess its allowed to use the stack vent to vent fixtures from the same floor.
Click to expand...

As I mentioned, stacked san-tees would be fine. The shower on the lower san-tee would be wet vented by the upper. (I also fixed a typo in my previous post, changing about to above).