Hello again. I was recently told that to solve a problem of mine, I should use teflon tape as well as teflon paste together, on the same NPT fitting. That kind of sounded strange to me, so I figured I should ask people who know something about plumbing. So, if it is true that both can be used at the same time, what's the preferred application method: 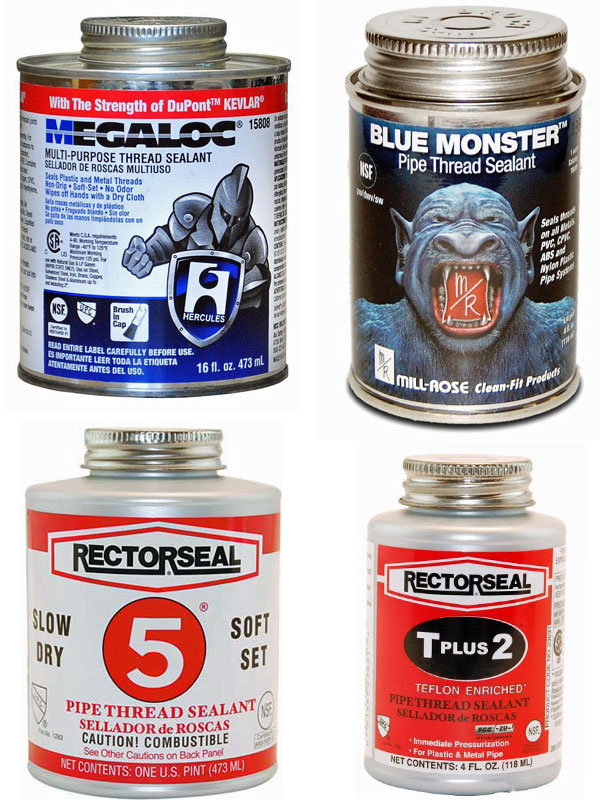 Location
Wherever I park the motorhome.

I've always used one or the other. BTW, on some plastic fittings, like a softener's plumbing connectors, you void the warranty if you use any thing other than tape.

IMO there is no advantage to using both. And dope makes a mess and takes longer to use and clean up than to use tape to begin with. A roll of various sizes and types are easier to store and handle than a can and its brush.

I use both. Thread then dope. The only reason I do this is becuase an old plumber told me a while back that he does it this way. That was good enough for me.

Well now, an older plumber is telling you that he seldom uses tape, except for PVC connections, and never both of them on the same joint. Everything else is done with paste dope.

I'm an old plumber and depending on conditions, I use both too.
And no, I don't make a mess...You don't have to goober it up with the dope.
If that saves one call back , it's really worth it to take the extra time.

I had a leaking male brass bushing in a female copper fitting, and the only way I could stop it from leaking was to use both. A good amount of dope on the threads, followed by a healthy number of wraps of tape over the dope.

Chassis ...you did good

And for some strange reason I still keep a small ball of wicken on the truck...it took me a long time to change (trust factor) over to teflon tape.

Location
indianapolis indiana - land of the free, home of

why be a tightwad???

I have found that either will do the job fine by themselves...

but when I use the teflon tape first and then plaster
some pipe dope on the teflon, you just cant go wrong...


it seems to me that the tape holds the joint very well, but I always
notice when you install that t+p valve into a water heater
their is more friction than I care for, when you add the pipe dope
it seems to lube up the tape very well. 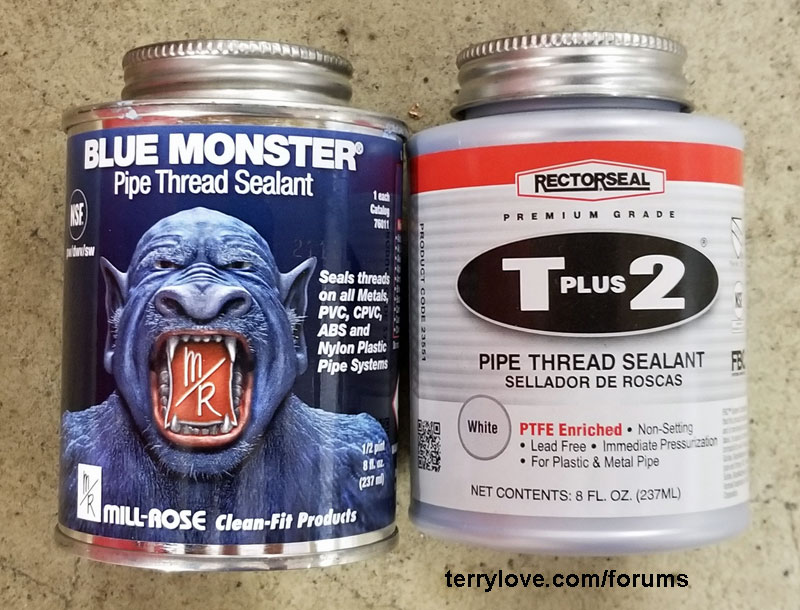 my menter, and a lot of others too

taught me to do 4 tight wraps followed by rector #5. this combo will allow you to back off 1/4 turn on a gas pipe, if necessary, without a leak

No problems with tape here, but if you overdo it then the tape just balls up and rolls off the threads completely (of course the old timers know that already, but the diy'ers might not...). If I have a pain in the butt connection that doesn't give me much confidence that it's sealed, then I'll use tape and then dope and that's NEVER failed me in a pinch. But normal everyday stuff, tape for this gal.
T

I use tape on all straight forward thread pipe fittings. On three piece unions, plastic traps and compression fittings I use a small amount of Rector seal as a lubricant for the threads and to help out the compression seal.

How About Gauze Bandage? Huh?

Look at this link (http://www.tamparubber.com/mainthd.htm). In short, they say:

"For stubborn to seal threads, apply a normal coating of thread paste followed by a normal layer of thread tape."

Places I don't use tape or paste?

Plastic fitting manufactures donâ€™t recommend the use of tape on their threaded fittings. The tape does not â€œsquishâ€ out of the way like paste and causes the threads to become misaligned.

See the link below. Toward bottom of page.

In the past, I've had problems with leaks using teflon tape, but never had a problem using paste.

Last weekend, I had a persistent weep at a 1/2" copper male fitting threaded into a brass union while using paste only. Remembering what I had read in this thread, I finally tried putting three wraps of teflon tape followed by paste and to my relief, that solved the problem. Thanks for the tip.

As HJ sez: DIYer's can "kludge" something together that lasts 30 years, while if a plumber did it, it would leak like a sieve the first time water was on. I use tape then dope. I use the yellow "gas" tape, because it's tougher than the white tape. 3 wraps, then Megaloc. The other day, I reworked some water heaters that were totally hacked in, by a professional. I used 4 brass nipples, and ran out of tape after the first two. Being too lazy to walk out to the van, I rationalised that when I was an apprentice, I had installed hundreds of water heaters, with dope only. You guessed it, one of the two without dope leaked. They were installed the same, but one leaked. Now, I had to bleed water, and loosen the flexi, the remove the nipple and tape and dope it. It would have been a lot quicker to just have got the tape first.

I am replacing a water shut off valve onto brass pipes, I have read a lot of suggestions and am wondering if Teflon tape on the male threads and Megaloc over the tape; and a bit of Megaloc over the brass ferrule are a good idea to get a solid seal?
You must log in or register to reply here.

How many turns to tighten pipe thread fittings

Help with PVC threaded to Brass without leaks.