I've had an extremely frustrating shower valve leak that I have not been able to repair. The house is a 1969 house with no access to pipes behind the tile; I installed cutoffs on the hot/cold water lines in the basement just to be able to work on this shower. The compression valves are sayco, and I've repaired and/or replaced valves and valve seats for the main tub - hot, cold, and diverter, as well as the hot valve for the shower with no problems. However the Cold faucet for the shower continues to leak persistently, even after multiple new valve seats, multiple new valve assemblies, and multiple re-checks of my work.

This particular stem was extremely difficult to get out originally, and the old valve seat was almost entirely encrusted with green mineral buildup. I used white vinegar to try to clear the additional mineral buildup out of the threads. When I look in there, I cannot see any visible damage to the seat threads or any buildup. I've even attempted using teflon tape or pipe dope to see if I could get a better seal on the valve seat. I've been very careful to not cause cross-threading when installing valve seats.

In every single case - whether I rebuild the old valve assembly or install a new one (as I've done in the other three installs) the leak is an almost unbroken stream of drips from the shower head that actually seems to get slightly worse if I try to tighten the valve too far. I've tried multiple new washers, and thicker washers. It looks like the new washers I put on are meeting the valve seat correctly, because I can see the impression and it looks good when I take it all apart again. There has never been any change in the end result so I have reached the conclusion that there is something else going on that I cannot fix by replacing the valve stem and the valve seat.

What could be causing this? I had assumed that some sort of crack in the pipe itself would cause a leak behind the wall that would be detectable in the basement. Reaching my wits end and would really like my shower back.

You have more patience than me. Often we just replace the entire valve in a case like yours. Moen and Delta can be had with large plates that cover the hole. Here is a Moen TL2368EP trim for their Posi-Temp valve. It also works for three handel replacements. 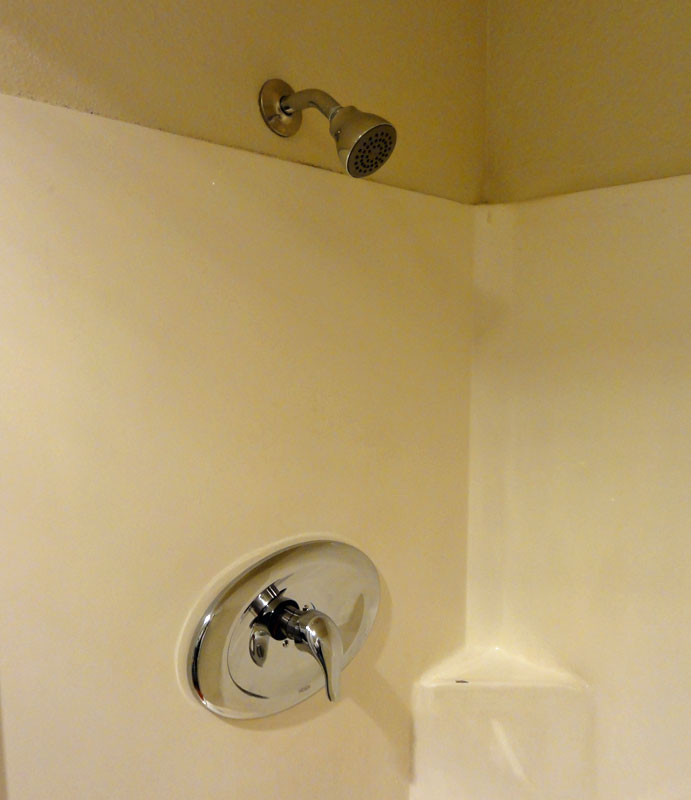 A new Moen Posi-Temp with their wider than normal plate to allow access for replacement.

Pfister replacement seat on the right from a different job.

It is possible to damage the valve body if the stem is closed when you screw it in. If that has happened the valve will need to be replaced. Anytime you are screwing in a stem it should be turned in the open position. If it is installed in the closed position it may leak because it will not fully shut after being installed.

I did not have any of the valves in the closed position when screwing it in. Also, I replaced this ONE valve five times with either a brand new one or a rebuilt one. I've installed five others previously with no issues at all.
I'm back to asking very specifically - what could cause this when the valve installation is fine, and the valve itself is fine? Is it the pipe behind the valve?
Cutting holes in tile is not an option for me.
You must log in or register to reply here.

Leaking Grohe Grohtherm 1000 Temperature Control. New shower could be installed within a month. How should I fix this without throwing away $300?