So, I just bought a house that was built in the late 1940s and as far as I can tell, the bathroom is more-or-less original. The house was built on a slab, and the walls are block, so it's not easy to move fixtures. I want to replace the toilet with a more modern one, so I went to measure the bolts to see how far the flange is from the wall (I'm extremely not a plumber, I don't know what I'm doing here at all).

The toilet, first of all, has four bolts. I've never seen a toilet with four bolts, but I found some threads on here that say this is the way they used to make some toilets in the 50s and 60s and that the front bolts were generally attached to the floor, the back bolts are attached to the flange. Mildly annoying to cut the bolts out of the tile floor but hopefully the bottom of the new toilet will cover them. Ok, so I measure the back bolts. They're about 15" from the wall. What's weird is, the toilet tank is only about 2 3/4" from the finished wall.

The front rim of the bowl is about 31" from the back wall, including the 2 3/4" of space between the back of the tank and the wall, meaning the toilet itself is about 28 1/4" long, normal toilet size.

The back edge of the foot of the toilet is about 8" from the finished wall.

So, I'm having a hard time understanding how this all adds up. Is there a kind of old toilet where the back bolts don't line up with the center of the flange? Am I gonna have to just undo these bolts and see what's under there?

I'm just trying to figure out what kind of replacement toilet I can order and how it's going to fit. It's a very small bathroom.

We would call it a 14" rough in toilet.
Toto makes a handful of skirted toilets (aka WC). For example the Carlyle II. The skirt hides the Unifit trapway which is made of heavy grey plastic.
It comes with a 12" rough trapway kit. You can buy a 14" trapway for extra.
Also, there are other two piece WCs out there with 14" rough. American Standard and Kohler did, and even Toto has a few.
Unfortunately, I don't think any comfort height two piece models are available. 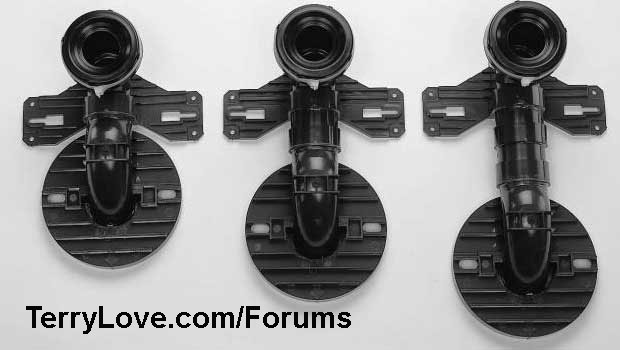 There are only three 'standard' toilet flange locations, 10, 12, and 14" with 12" being the more common one out there. With that large of a gap behind the toilet, that toilet was probably designed for a 12" rough-in, which would leave about 3/4" behind it.

TO know for sure, you'll have to pull the toilet, but you can often get a good idea by looking at the side of the toilet where, on many of them, you can see the waste pathway...the center of that is the center of your flange.

So, to get the most room in the small bathroom, and minimize the gap behind the toilet, I suggest you look at one of the Toto toilets that utilizes their UniFit adapter. Those toilets that use that fitting come with a 12" one in the box, so you'd have to buy the 14" one. If the flange is centered at 15", you'd have about 1-3/4" behind it - and inch more than if it were an actual 14".

The Vespin is a two-piece that utilizes the Unifit adapter.

At 15" from the wall, that is measured by the back bolts that hold the toilet, the best you can do is pick up a toilet that also works at 14".
Many homes built in the 1920's had 14" rough-ins for toilets and eventually that changed to 12" as the standard. Everybody makes a 14" rough for that situation. TOTO was pretty early on with the Unifit equipped toilets that allowed you to switch out the 12" for a 10" or a 14", which has come in pretty handy for my installs. I carry the options on my trucks, and can adjust as needed when installing for my customers. 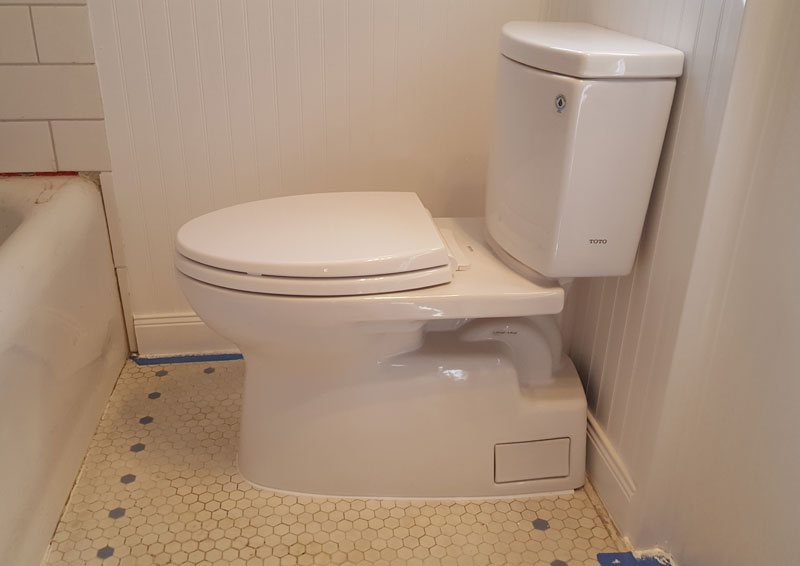 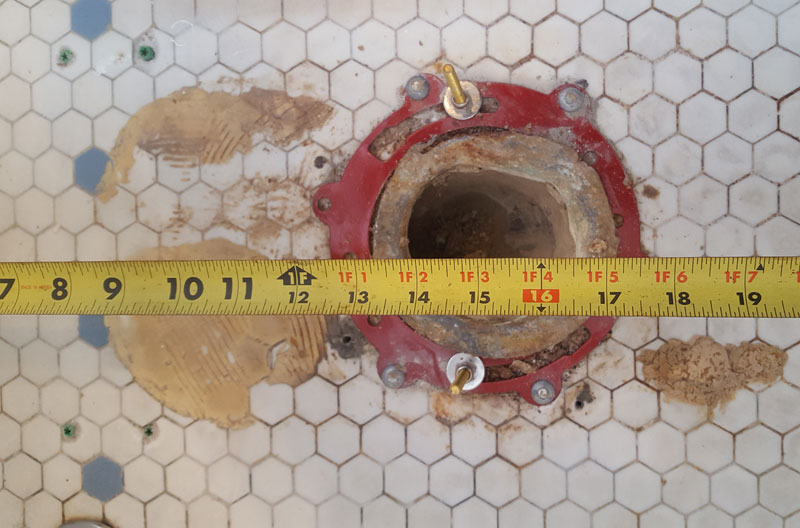 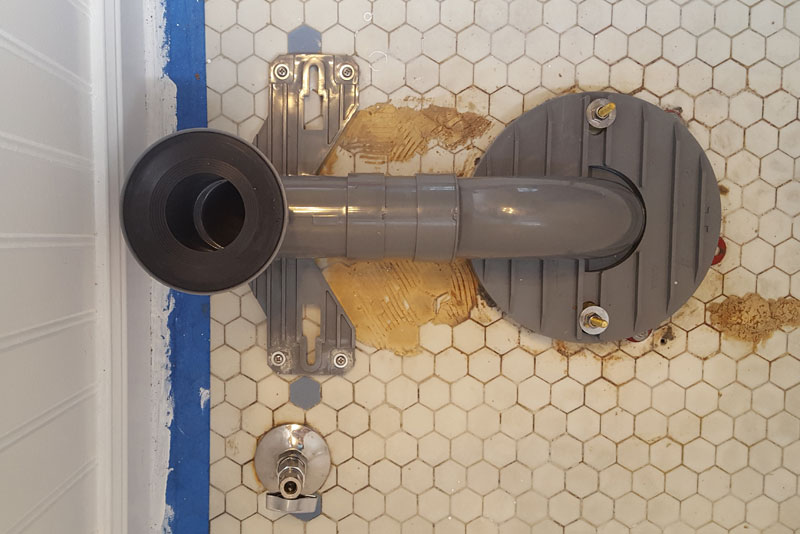 You could order an American Standard Compact Cadet Pro in a 14" rough in. The distance from the wall to the edge of the bowl would be about 31 inches, and it would be an elongated bowl as well.

roughed in around 14 inches a 12 inch toilet installed. is what it is.

Terry said:
At 15" from the wall, that is measured by the back bolts that hold the toilet, the best you can do is pick up a toilet that also works at 14".
Many homes built in the 1920's had 14" rough-ins for toilets and eventually that changed to 12" as the standard. Everybody makes a 14" rough for that situation. TOTO was pretty early on with the Unifit equipped toilets that allowed you to switch out the 12" for a 10" or a 14", which has come in pretty handy for my installs. I carry the options on my trucks, and can adjust as needed when installing for my customers.

looks like toilet needs turned 90 degrees in photo , 15 inch side rough perfect. A good example on how a unifit can adjust

I've had a Vespin installed for about 20-years...the only things it has needed are the typical flapper valves and the cap seal for the filler valve. How often that needs replacing, assuming yours gets that valve, depends somewhat on how high your water pressure is...the higher the water pressure, the shorter they last. 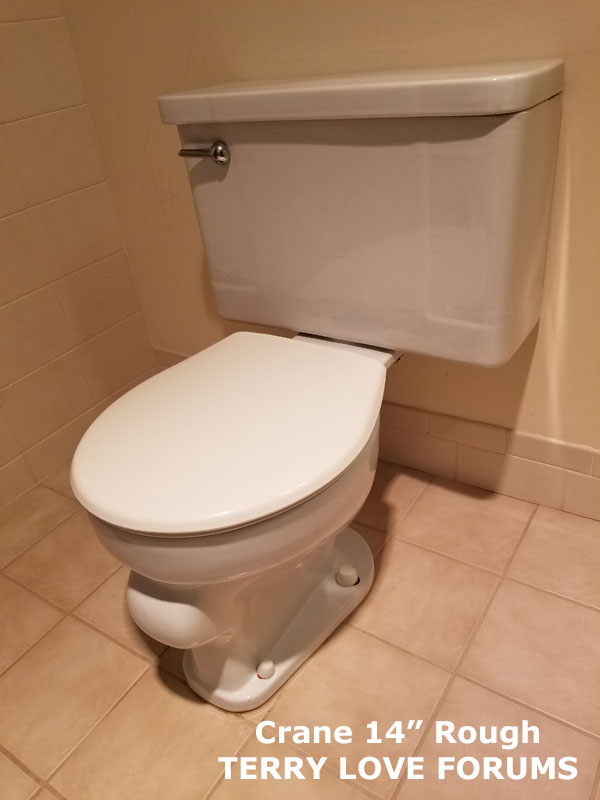 This one needed the front bolts to prevent the toilet from falling backwards. It wouldn't balance on it's own. 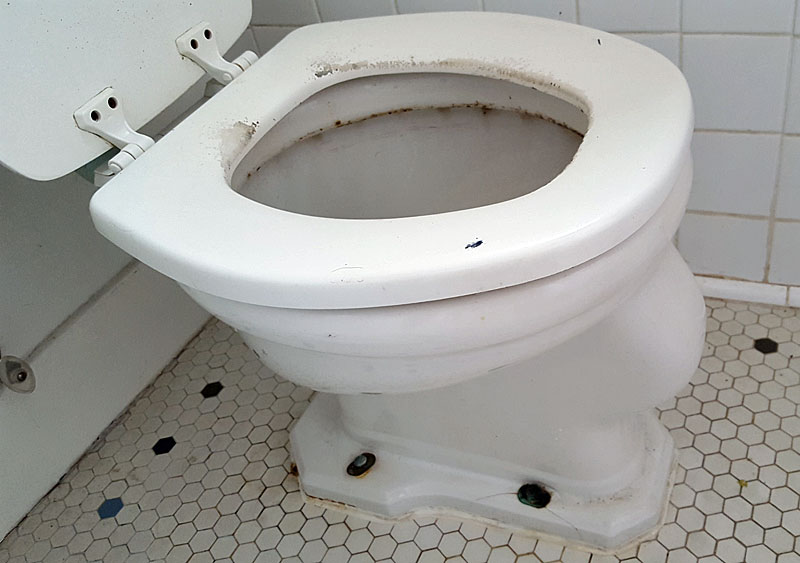 One this one, the tank was mounted on the wall, and connected by a tube to the bowl.

Man, you guys rock. I really appreciate the help, this is a great forum.

Many 14" RI toilets are really a 12" one with a thicker tank. The Toto ones that use the Unifit adapter use the same toilet, and move it back and forth with the adapter.
You must log in or register to reply here.

Searching for a 14" toilet