NFL Football Sundays and what we like about it.
I love watching football, and like playing flag and touch.
Not so much tackle anymore.

Last Sunday I took my son Taylor to the game.
Picked up some tickets from my brother Shannon "Sea Pimp"
That is "not" what he was called when he was younger.
Sea for Seattle and Pimp for, well........for the funny stuff he wears to the games.
That's all new too.
He stands right across the isle from "Big Lo" so maybe it's the right stuff, since the entire section is a bunch of stark raving crazy for their Seahawks fans.

But before you go into the game, you need a hot dog at one of the stands outside. They just taste better when you buy them outside. 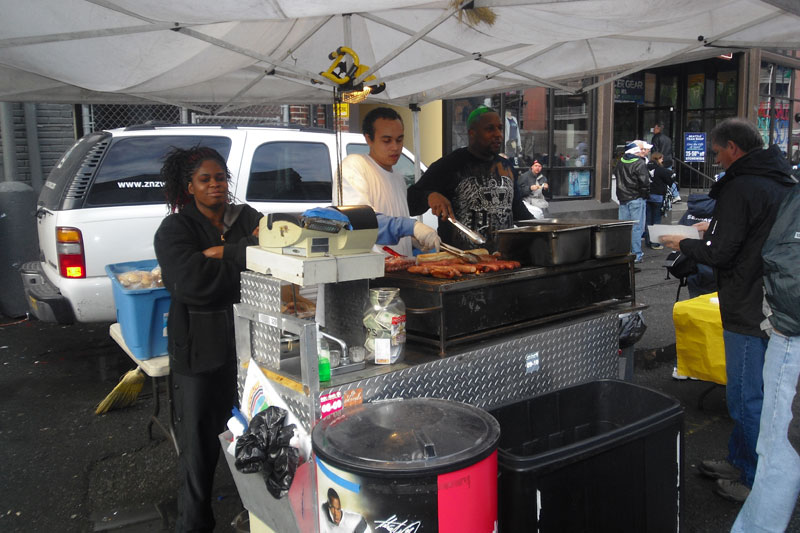 Pay your money to the gal, and then get in line for your dog on the right.
Yeah, I'll take some onions with mine. 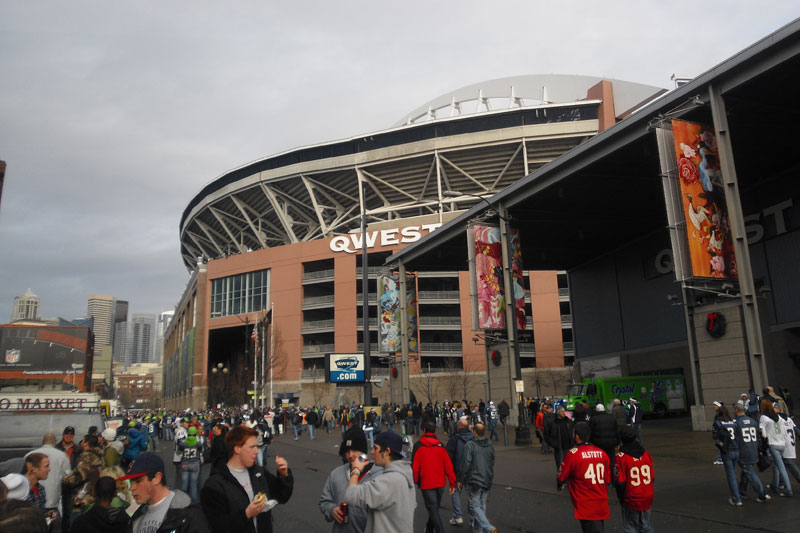 Time to walk around a bit, getting the football watching moment on. 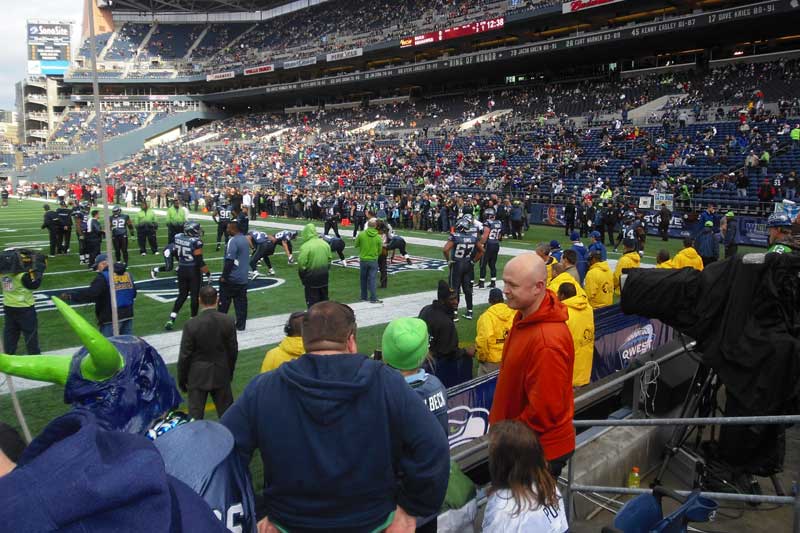 Almost game time now.
A little bit of warm-ups still going on, and tons of people on the field before game time. 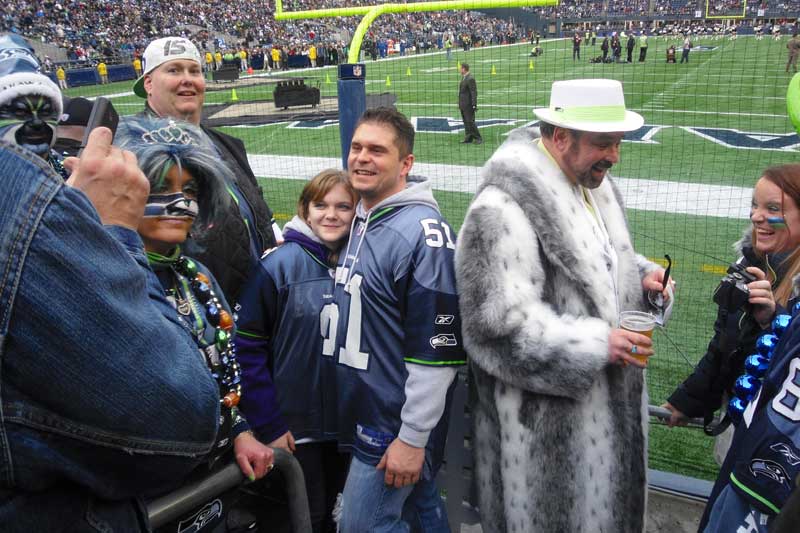 Big Low with the baseball hat turned backwards, in front of him, Mrs Seahawk, the one with the nose paint.
A couple getting thier picture taken,
And my little brother Shannon in his Pimp coat.
He's six foot three, but he is younger.
It's fun sitting this close, the fans are into it, and you have a quarterbacks viewpoint of the game. 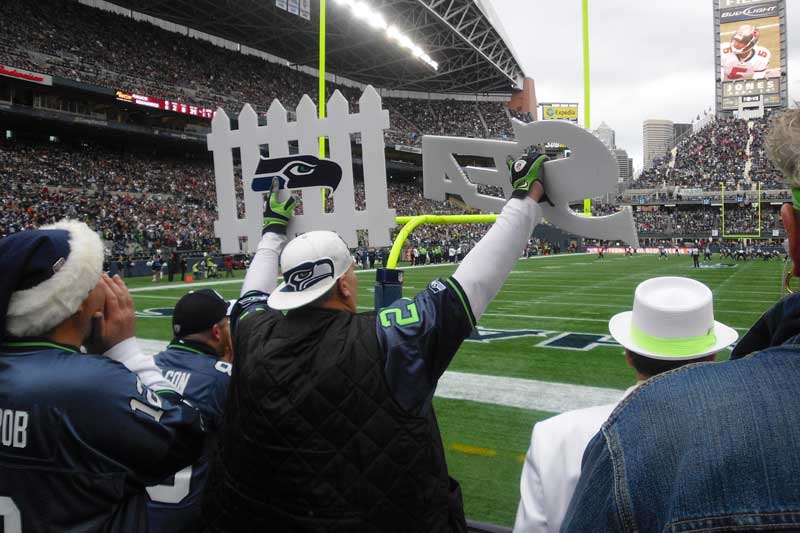 Have you watched Seahawk football on TV?
That's Big Lo holding up the Sea Fence sign.
On the right, oh yeah, that's Shannon.
It's a warm day in December so not many people are wearing coats. 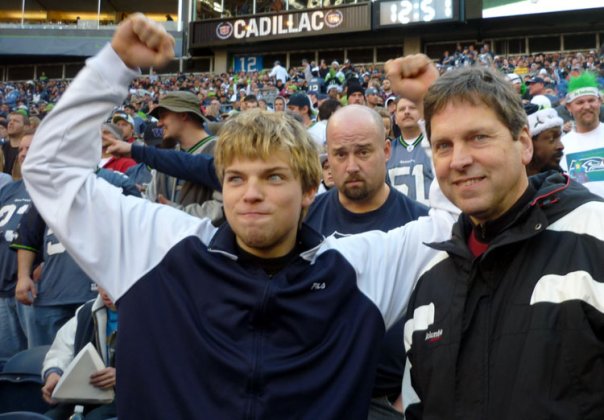 Okay, I'm wearing a coat.
My son Taylor is on the left, the guy behind in the center drills wells in Omak, and then me on the right. You know what I do.
Taylor is cheering hard, but we're still losing.
The guy from Omak drove four hours to get to the game.
Not a good game for him today. 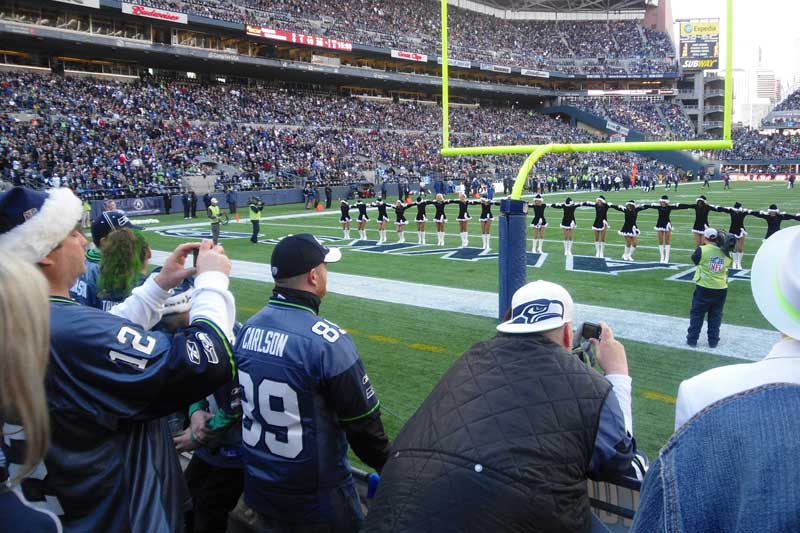 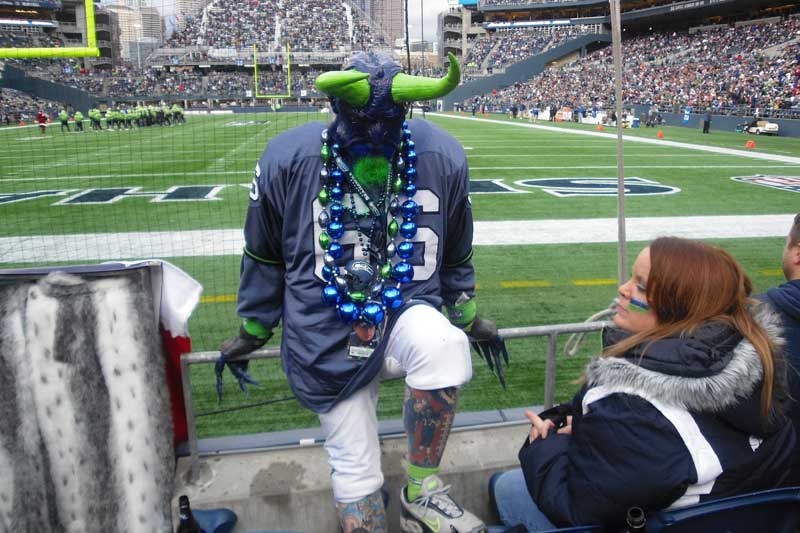 And this is our down moment.

Hey, it was stil fun.
I like going to high school games too.
I watched the last three Bellevue High School games this year.
They got their seventh state championship in the last ten years.
That's where I went to school.
I didn't play football then, I was in the music programs.

I'd pay to see Terry wearing Shannon's coat at the next game.
You must log in or register to reply here.

Punching bags in bars and how it's done!

Who has the best NFL fans in football? Tom Brady now thinks it's in Seattle!