Hello,
I checked through this forum, but couldn't find anything that seemed to address my problem. Here are the details of my issue, what I have done to address it, and finally, my questions.

Repair history:
March 2016: PC Board & Gas Valve failure. Both replaced.
September 2020: Re-circulation pump stopped working. Determined to be due to air in the lines caused by recent installation of whole house water filter. Air purged from system and has worked fine since.

Problem:
Water temperature fluctuations in shower every day over several days. Continuous temperature cycling from hot to warm to hot to warm. Verified that no other water fixtures (cold or hot) were being used at the time. Recent problem; never seen before.

Troubleshooting:
First, to eliminate the shower head and shower proportioning/anti-scald valve, measured hot water temperature at sink faucet in same bathroom as the shower. Used a thermocouple attached to a DVM, calibrated at 32 F and 212 F. Sink faucet is a widespread design with completely separate cold and hot cartridge valves. Water heater is set to 120 F. Hot water temperature at sink continuously cycled from about 112~113 F down to about 105~106 F. Did not actually measure the cycle time, but it was on the order of 15~20 seconds to drop to minimum temperature then another 15~20 seconds to climb back to the maximum temperature. Watched this for a few minutes with no change to the cycle.

Second, repeated this test at the kitchen faucet, which is the farthest fixture from the hot water heater and also the far end of the re-circulation loop. Same result seen, though the highest and lowest temperatures were a degree or two lower (attributed to the extra run length and probably poor pipe insulation).

Third, turned the shower on with the temperature set to high and went out to the water heater (located in an insulated closet under the house roof-line, but only accessible from outside). There were no error codes shown, the water flow through the heater was indicated to be ~2.1 gpm, the outlet water temperature was shown as 127 F and the inlet water temperature was shown as ~71 F. The burner indicator was cycling on and off, with a sound like a turbine engine spooling up when it came back on. The cycle time was about the same as noticed before: 15 or 20 seconds on followed by 15 or 20 seconds off and repeating. Watched this for a few minutes.

My questions:
Do I write this off as a one-time occurrence and assume/hope it wont happen again? Should I treat the Navien like a windows computer that requires an occasional power cycle to continue working? Or is this indicative of an underlying problem that I should get fixed before it happens again, or causes a more severe problem?

Have you looked at the incoming air filter? 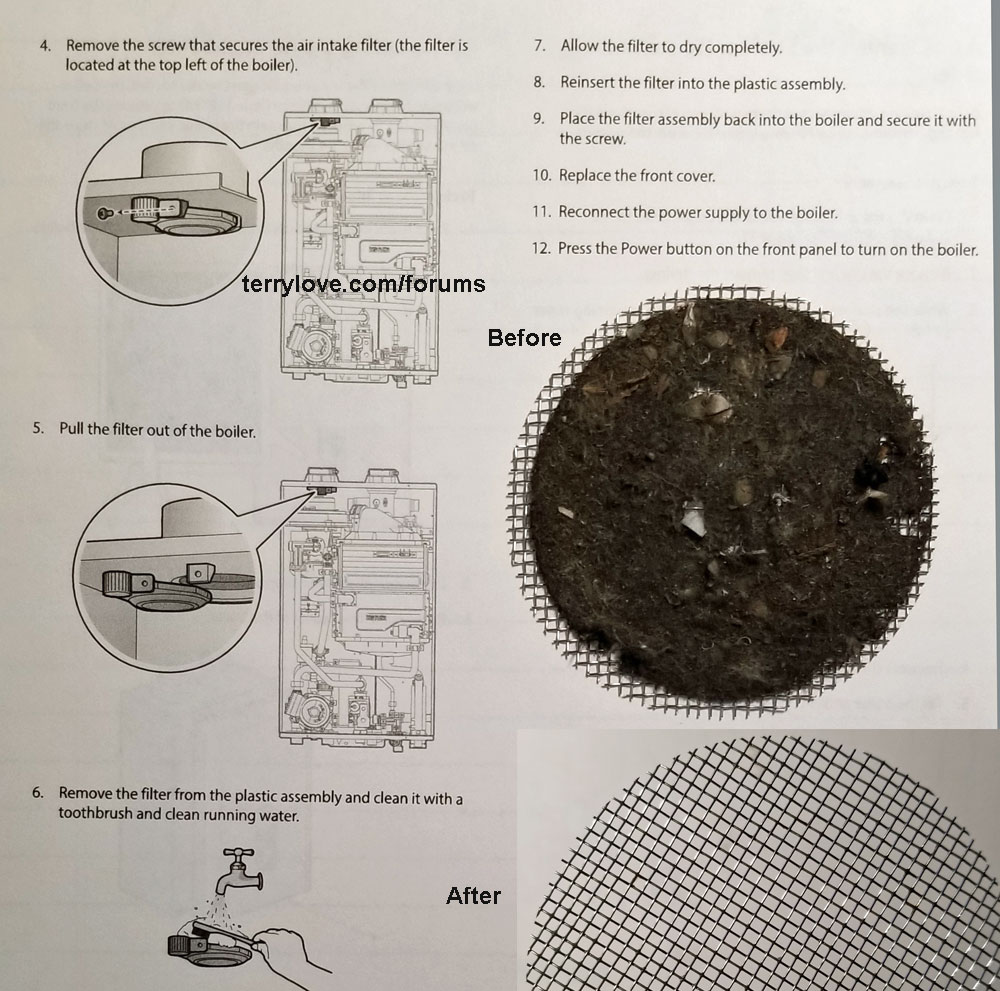 Terry said:
Have you looked at the incoming air filter?
Click to expand...

Yes, I removed and cleaned the air filter. There was almost no contamination visible, but I cleaned it under running water with a soft toothbrush.

Might want to watch the flow read out if it happens again. Flow sensor might have been dropping out momentarily.

A common issue with that model is failure of the internal check valve from closing fully. When the check valve is not fully closed, incoming cooler water can flow in reverse through the internal circulation pump so some of the flow to faucets will flow backwards from the recirculation return line, thereby reducing the water temperature to faucets. The intermitant nature of the problem maybe due to the internal circulation pump becoming activated, thereby restoring the correct flow direction until warm water is again sensed entering the WH's recirculation water supply connection whereby the pump will be shut off again. 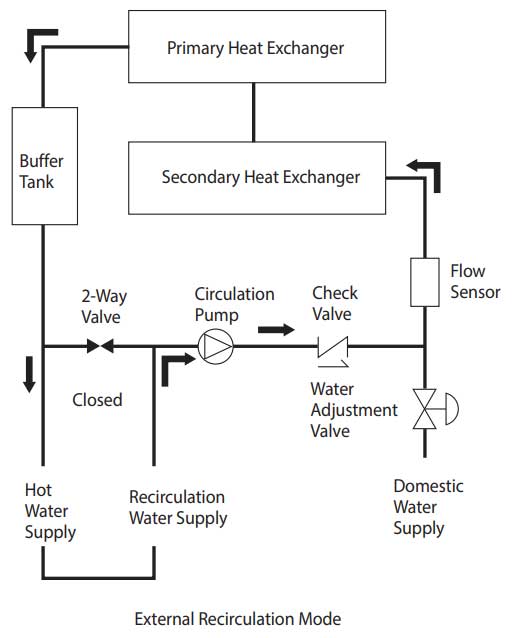 Check the condensate system and clean it.

Fitter30: I watched the flow indicated on the water heater's display, and it was, for the most part, constant. I saw only a 0.1 gpm fluctuation (2.1 to 2.0 gpm)

Bannerman: Thank you for the suggestion. Would an issue with the check valve cause the burner to cycle on and off in a 15 to 20 second cycle? I believe that was the source of my temperature fluctuation: the burner turning off and on. The timing of the temperature swing and the burner on/off were the same.

John: None of the documentation I have explains how to clean the condensate system. Is this something an owner, who happens to be a mechanical engineer by trade, can tackle? Or is it best left to professionals? I will look online for instructions.

Thank you all for responding!

That will depend on the amount of reverse flow to your faucets.

Edit to add: Ensure also the 2-way valve is fully in the External circulation position. When there is reverse flow through the check valve while the 2-way is in the Internal position, cool water flowing in reverse through the check valve and pump, will mix with the hot water exiting the heat exchangers and buffer tank, lowering the temperature of the water exiting the WH while also reducing the flow rate through the flow sensor and heat exchangers.
Last edited: Nov 23, 2021
You must log in or register to reply here.