I'm converting from a tub/shower to a large (72" x 72") roll-in shower with 2 shower valves and heads -- one standup and one at a bench. The tub used a 1 1/2" drain, and the shower requires 2". But the existing tub drain to the stack can be easily replaced with 2" using the same routing.

1) Does this shower count as 2 or 4 fixture units? (The Code says 2 for a "shower stall" but I'd bet an inspector would count shower heads.)

2) The geography of the installation moves the new shower drain a few feet away from where the tub drain was. The 2" drain heads east down a joist cavity, then takes a 90° turn to go south to the 3" stack, following the same path as the old tub drain, and conveniently passes right by the old 1 1/2" tub vent. The maximum developed length to the vent is 8 feet, but the question becomes what exactly defines the ends of that measurement. In my case, it's nearly exactly 8' to the upstream side of the 1 1/2" old tub vent, starting from the downstream arm of the trap under the shower, but over 8' measuring from the upstream arm (the drain side) to the downstream side of the vent. And, since we're turning 90°, if you measure down the centerline of the pipe, it's longer then down the inside of the curve, etc. I hate to quibble over inches, but tend to favor near-side to near-side, hoping my inspector will feel the same way, and would love to know what the experts think.

Trap arm length is measured from the trap weir to the inside near edge of the vent opening, measured along the centerline of the pipe. 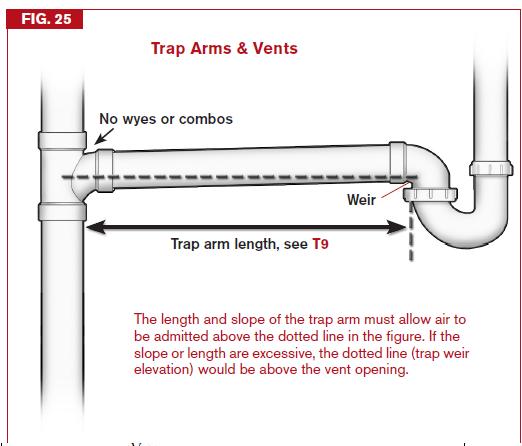 If you're in Washington, you're under the UPC.

plumber01 said:
If you're in Washington, you're under the UPC. UPC calls for a maximum of 5' on a 2" trap arm. Shower drains count as 2 fixture units, each additional shower head is 1 fixture unit.
Click to expand...

Margin, plus they want more than zero clearance for air. IPC allows 8.
You must log in or register to reply here.

What length fittings to leave for Grohe fixtures?