Massachusetts has one of the strictest codes in the country, if you have a question please ask. I am a code official in Massachusetts and would be available for a code interpretation.

Here is a conversation I am having with a contractor.

Ground joint brass connections that allow the adjustment of tubing while providing a rigid joint when made up shall not be considered a slip joint.

Stub out of the wall with 1.5" copper tubing for a lavatory sink.

Then install solder on a 1.5" copper x 1.25" compression Desanko to accept the chrome P - Trap.

Use a 1.25" Brass Compression Feral instead of the plastic one they send with the Desanko

That is a legal way to connect this sink.
The purpose would be to use a trap adapter on the house side with a brass feral to connect a chrome p-trap.

So would a copper trap adapter with a brass feral be considered a ground joint and therefore legal on the house side of a trap.

MACODEDOC said:
Massachusetts has one of the strictest codes in the country, if you have a question please ask. I am a code official in Massachusetts and would be available for a code interpretation.
Click to expand...

Hi - I am trying to build a tiny house in Mass and my head is spinning by all the requirements. I have many questions but the first one is, is it possible to take a raw lumber shell and make it code compliant, or is the lumber the wrong sort? I had originally wanted to love on my land in a yurt but that's not allowed, so now I have to come up with a permanent structure of comparable cost. I found a place in Vermont called Jamaica Cottages that sells these kits and shells but I'm not super sure they are up on all the requirements here in Mass. I'd really love some advice - if this solution won't work then I have to think of something else. Thanks, P

Hi- I rent in Ma. I am having trouble with hot water. I drained the hot water tank. Out came some sediment. the knob for the temp. is variable.
My question is what is the range of water temputure. So that I can adjust it. The landlord said it was working in the temp range...
I put a instant read thermometer and it's reading 100 degrees. I told the landlord that my dishes are even getting clean. Only because the water is not hot enough. please help me with this problem

I use Rinse Aid in my dishwasher. I can't imagine washing dishes without it. It comes with new dishwashers, but seeing as you're in a rental, I would guess you need a refill.

On most gas water heaters, the A on the dial is 120 degrees. Is yours electric or gas?

A tank-type WH needs to be at least 120-degrees, otherwise, it can be unsafe. Cooler temperatures (and some would argue 120 isn't high enough) can support growth of stuff that can make you sick. SOme advocate at minimum of at least 140-degrees F to kill any pathogen faster. Temperatures around 120 tend to slow any growth, but not kill it (depends on what 'it' is!). Code requires that the outlet of the WH be limited to 120-degrees, but that doesn't mean the tank itself can't be hotter. Many places require the outlet of a WH to have a tempering valve to restrict the maximum temperature to 120-degrees, unless it is restricted to things like a dishwasher or the washing machine. The idea is that water hotter than 120-degrees is a hazard, since it can cause scalding, especially on young or old, whose skin is thinner, and elicit a fall from being say in a shower, and trying to jerk away from the excessively hot water. People don't normally operate either the DW or WM while open, so higher temp supply is allowed there. FWIW, my WM can be set to heat the water if you want it super hot, and is a common feature on many sold outside of the US. My DW can heat the water, too.

A DW that does not have the capability to heat the incoming water will not work well if the water isn't closer to 120...100 won't cut it. But, some DW can heat the water, and other than taking longer for the cycle to run, they'd work with cold going in. They act like a mini water heater when they are not at optimum temperature, but again, that feature is not available on all, and on many of those, you have to turn it on to function.

Bottom line, if the WH tank was generating 100-degree water, I'd not find that acceptable. Distribution losses in getting to say a shower would mean a cold shower, and it wouldn't work well at grease when trying to wash dishes in the sink, either!

I'm trying to sort out the plumbing in a recently purchased townhouse/condo. It's an old farmhouse and barn converted into condos in 2000.

I know the current code requires a future vent to be installed in the basement. But when was that required? Thanks in advance.

Massachusetts has some strict plumbing code requirements. One thing that can disrupt things is that all plumbing is supposed to be done by a licensed plumber, ev en in a single family home by the owner.

The second thing to consider is that while you may be able to buy all sorts of plumbing fixtures and bits even from local suppliers and on-line, only those that are listed on the state run database are functionally legal to install and use in the state. To avoid issues, first, check the website to see if the parts you want to install are on the list. If not, contact the manufacturer to find out if they will do the paperwork to make it happen. Failure to do this could mean tearing it out if an inspector gets involved (that's required, avoiding it can get expensive if caught). So, go to this site and check to see if your products are listed. If they are, life will be much easier on you and all involved!
Last edited by a moderator: May 24, 2020

MACODEDOC said:
Massachusetts has one of the strictest codes in the country, if you have a question please ask. I am a code official in Massachusetts and would be available for a code interpretation.
Click to expand...

I have an ongoing laundry room remodel and want to better under the work to be done.

A washer and dryer ("W/D") are to be relocated and stacked stacked along a wall reclaimed from the adjacent garage. A new utility sink ("U/S") is to sit next to the W/D and hopefully share some of the drain and vent pipes per the drawing. I tried to represent the work in perspective view and in bird's eye top down illustration. Proposed pipes and fittings are numbered in the drawing. My question is whether either option A or B would work for the new U/S vent (and are there any other issues)? 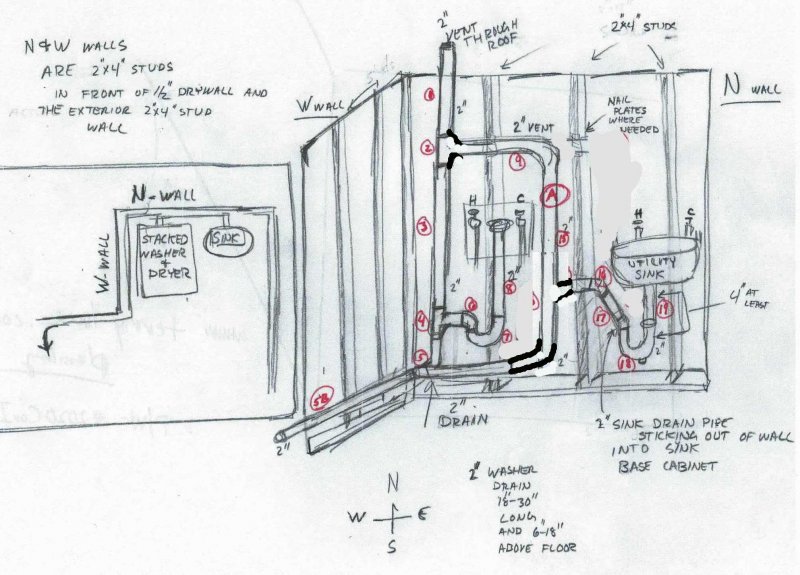 I would put the cleanout above the santee for the sink trap arm.
A works,
B doesn't

Out of the trap in the 16 the pipe goes horizontal to the sanitary tee. The vertical distance from that horizontal trap arm to the top of the U in trap at 18 must be between 4 and 2 inches. Your "trap seal" looks way too deep.

Also your trap arm must be below the bottom of the sink. I recognize that this might just be a drawing anomaly, but I thought I would point that out.

Terry said:
I would put the cleanout above the santee for the sink trap arm.
A works,
B doesn't
Click to expand...

Terry said:
I would put the cleanout above the santee for the sink trap arm.
A works,
B doesn't
Click to expand...

Could you clarify a bit more where the cleanout should be located?

My preference for a cleanout would be on the vent for the washer. That way you can snake past the santee on the trap arm.
The laundry sink could also get on in that location, though the washer would be enough.

I would guess he's using a standard p-trap, which is hard for me to draw too.

Reach4 said:
Out of the trap in the 16 the pipe goes horizontal to the sanitary tee. The vertical distance from that horizontal trap arm to the top of the U in trap at 18 must be between 4 and 2 inches. Your "trap seal" looks way too deep.

Also your trap arm must be below the bottom of the sink. I recognize that this might just be a drawing anomaly, but I thought I would point that out.
Click to expand...

So I think I'm understanding you correctly....

(My illustration of Arm (17) is a little distorted, as I was trying to show Arm (17) extending perpendicularly to the face of the N wall thus placing it underneath the U/S.)

Per Terry's comment, a cleanout should be installed: a) in U/S down pipe 19; or b) in pipe (15) above the sanitary tee (not number in the revised drawing)?

Terry said:
My preference for a cleanout would be on the vent for the washer. That way you can snake past the santee on the trap arm.
The laundry sink could also get on in that location, though the washer would be enough.
Click to expand...

BrutusBuckeye said:
Okay, that Cleanout would then be placed on vertical vent pipe (3) above sanitary tee (4) but below sanitary tee (2), correct?
Click to expand...

Yes, that's where I like it.
Though the cleanout location below is nice in that you can snake without moving the washer.
They have a sill cock there so that they can fill the waste and vents for a plumbing test using a washer hose. After the test the cleanout plug goes back in. 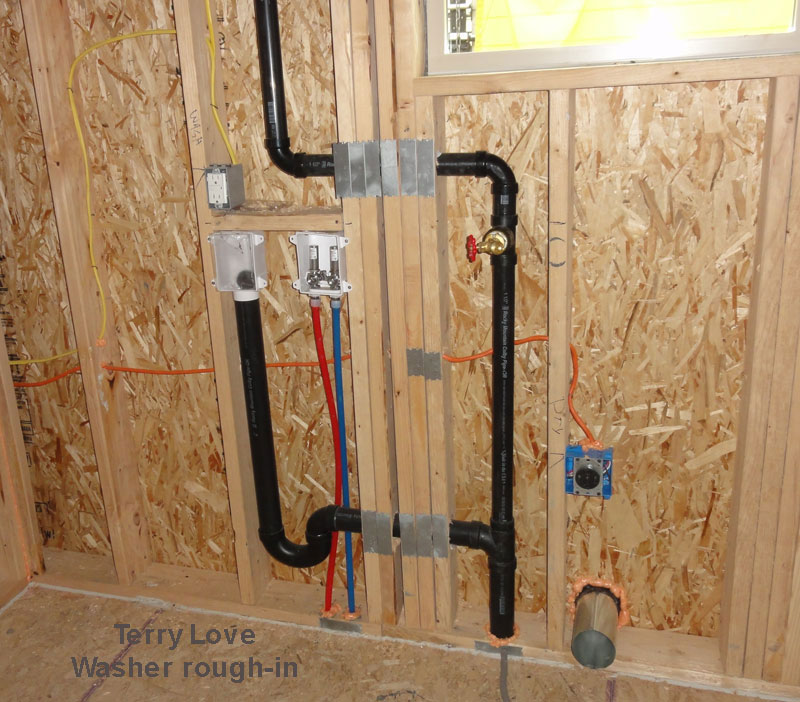 Is this legal, or do I have to tie in everything In at the stack at the same level?