How to unstick the stop valves of a Moen shower?

Hello,
I need to substitute the cartridge of my old Moen pull-out shower handle that has become so hard to push back in that in the last attempt I broke the faceplate. The problem is that I live in a condo and I can't switch off the water to my apartment without affecting the whole column (which requires a week notice).
For this reason, I was thrilled when, taking off the broken faceplate, I discovered that it hid the two screwdriver-operated shut-off valves shown in the picture below (I think they are properly called stop valves). After some Internet search, I learnt that there are possibly two types of those stop valves used by Moen: one type only moves by a quarter turn (open when the screw mark is horizontal, close when vertical) and an older type that gets closed by turning the screw clockwise for as long as its travel allows. Considering the position of the screws in the pic, I assume I have the older type.
What I regarded as a lucky break, however turned quickly into a source of huge frustration as I have been unable to move any of the screws by a single degree, either by applying the full stall torque of my drill and my impact driver, or even letting the latter run for a short series of impact hits (I was a bit reluctant of using the full force of the impact driver as I feared it could damage the valve, but I was hoping a few hits could produce enough vibrations to unstuck the valve). Not even using a heat gun produced any result.
Is there anything else I should try? Maybe let the impact driver do its job without taming it? Was the heating gun counterproductive by causing further expansion and I should try using some freezing spray?
I have seen that there are impact screwdriver that are actuated by hitting the top with a hammer. Hovever I can't see them being useful in this case, as the screw is not sitting on a stiff structure and it would move by effect of the hammer blow without producing the necessary reaction force.

Any suggestion would be highly appreciated as I feel I am as stuck as the two valves.
Thanks 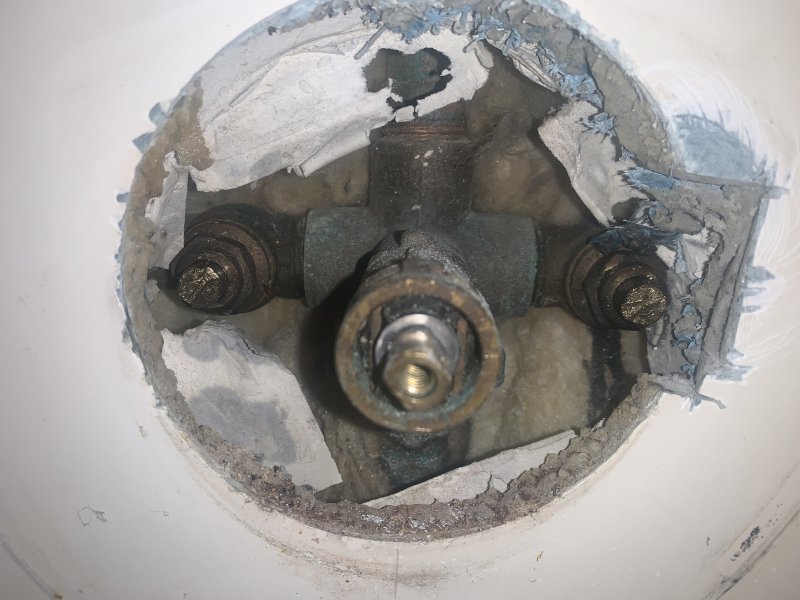 I am not trying to remove the stops, just to close them to cut the water flow while I substitute the cartridge. In the worst case, I will have to request cutting the water to the three apartment column, but I'd rather avoid that if I manage to get the stop valves operational.

I think your going to want the water shut off no matter what. It looks like you could possibly shave/file/dremel two sides flat and try a wrench, but anything you try has the potential to either cause a leak that won't stop, or even if you get them to finally turn, they possibly won't stop the water fully.

Is there any way you could add an access panel and proper valves?

Hi John, the heart of my dilemma is that for the water shut off I need a full week of advance notice and I have plans to leave for vacation before then. If I caused a leak, I could request an immediate emergency extraordinary shutoff but at that point I would need to replace way more than the cartridge. So maybe I should just not shower until I leave lol.

I like your idea of using a wrench type of tool, and maybe I found an easier way to try it out than reshaping the screw head, as I found and ordered these "screw grabbing pliers"


John Gayewski said:
Is there any way you could add an access panel and proper valves?
Click to expand...

Do you mean just for the tub/shower or for the whole apartment? I don't think either is easy. In the tub case, the hot and cold water lines are coming to the cartridge from opposite directions, making it difficult to have a common access panel. For the whole apartment, which I'd love to have, I have no idea of where the water lines enter my apartment, but even if I did I am pretty sure that I could cut the water to my apartment without cutting the supply to my downstairs neighbour as well, which might make for some interesting interaction ;-)

You may need to arrange to shut down the column, have a puller handy with you.
I have Moen in my home, installed hundreds of them in the 70's like that. It's an easy replacement with the tools handy.
I like to replace the trim at the same time, new plate and handle. 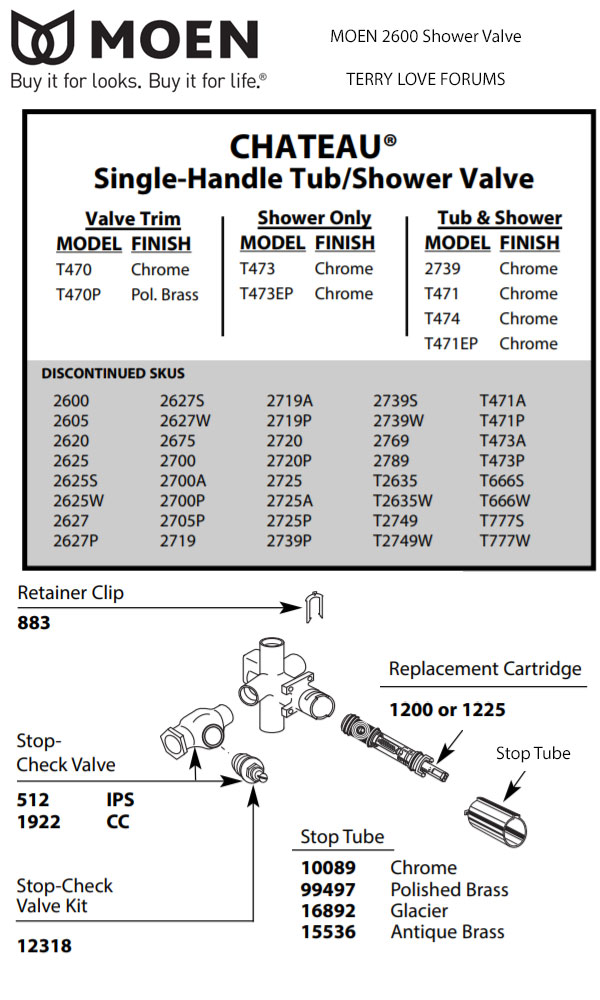 Terry said:
You may need to arrange to shut down the column, have a puller handy with you.
I have Moen in my home, installed hundreds of them in the 70's like that. It's an easy replacement with the tools handy.
I like to replace the trim at the same time, new plate and handle.
Click to expand...

Hi Terry, thanks for the great diagram with the part numbers! So, do you think there is no way to make the two stop-check valves operational without damaging them? I would just need to briefly close them for the time necessary to substitute the cartridge. I also bought the cartridge puller. After that, I won't care anymore about these stop-check valves as a Moen 1200 cartridge is likely good for other 20 years.
My understanding is that the stop-check valves are always open, so if I force them they should not be creating a leak through the spout, but I might cause a dripping directly from their body that maybe can be fixed by sealing them somewhat.
Last edited: Aug 15, 2022

You might be able to close them, I prefer to not touch some parts if I don't need to or can find another way.
But in your case, you might as well see if it works. You can't replace the stops without the water being off, so there doesn't seem to be a point to get replacements.

Is there any merit behind the idea of using a freezing agent? I was thinking to try one of these pharmacy products to freeze foot warts, even though I don't think they can sell the liquid nitrogen treatment.

Iitalnsd said:
Is there any merit behind the idea of using a freezing agent? I was thinking to try one of these pharmacy products to freeze foot warts, even though I don't think they can sell the liquid nitrogen treatment.
Click to expand...

Not really unless your talking about freezing the water line to close it which people do. But wart freezing spray won't do it, and freezing a water line for this would be silly.

People use heat to free up metal parts but not when they are filled with water generally. Penetrating oil is probably a better bet, but still no promises.
You must log in or register to reply here.