How to properly use / configure Navien hydronic system

Hi,
Should a Navien hydronic heating system turn on and off four to five times an hour?

I am living in a place with a Navien CH-240 that drives domestic hot water and an in-floor, six-zone hydronic heating system. The hydronic system uses PEX tubes under a concrete floor. I have only ever had forced air and typical water tank heaters before.

Now, I am used to having one thermostat in the home, and programming it to have different behaviors at night, morning, away at work, and evening. You know, typical stuff. But it seems that this system I am living with now is... different.

Ok, the problem is, some nights I hear the thermostat "click" on and Navien spin up, and then "click" off, and then on and then off. Is that normal? Especially at night, this happens for many hours and is a little annoying. But more importantly, it's like the Navien is burning gas and electricity all night.... shouldn't it be, I don't know, "smarter"? My gas and electric bills certainly don't seem any less than normal (but I don't really know).
Because of this annoyance, I usually only warm one or two zones and leave the rest at around 65 so they too don't click on and off all night.

Is it better for me to set all of these thermostats at a higher temperature than what I normally would with a forced air system?

Is it better to keep them at a constant temperature, like 70, rather than trying to turn things down at night or before I leave home for the day, like I would with a schedulable forced-air thermostat?

Should I raise the temperature of the hydronic water so that it releases more heat in the floor, longer?

Thanks for any insights and tips... I am not sure I am explaining why this system confuses me as it does.

The CH-240 utilizes a modulating burner with a gas input of anywhere between 20,000 BTU - 199,000 BTU. When the water temperature setting is appropriate to match the building's heat loss, the burner should run almost non-stop with the smallest flame needed to supply sufficient BTUs.

Of course, during the Nightime and Away setback temperatures, fewer BTUs than usual will be needed, so each zone thermostat will be satisfied more quickly, but circulating cooler water should result in longer circulation time than currently needed to cause each zone thermostat to be satisfied which will in turn result in longer boiler run time without cycling while using a smaller flame.

The video below is intended to explain the concept even as the Navien model mentioned is not the specific model you own.

fitter30 said:
Brand and model of thermostats? What are your heat emitters? Furnaces heat air, boilers heat objects that radiate.
Click to expand...

Thanks for asking. These are Uponor thermostats connected to a Wirsbo thingamagic that is then connected to the Navien controller itself.

Joe B said:
Thanks for asking. These are Uponor thermostats connected to a Wirsbo thingamagic that is then connected to the Navien controller itself. 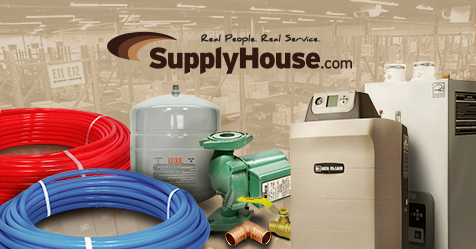 The CH-240 utilizes a modulating burner with a gas input of anywhere between 20,000 BTU - 199,000 BTU. When the water temperature setting is appropriate to match the building's heat loss, the burner should run almost non-stop with the smallest flame needed to supply sufficient BTUs.

Of course, during the Nightime and Away setback temperatures, fewer BTUs than usual will be needed, so each zone thermostat will be satisfied more quickly, but circulating cooler water should result in longer circulation time than currently needed to cause each zone thermostat to be satisfied which will in turn result in longer boiler run time without cycling while using a smaller flame.

The video below is intended to explain the concept even as the Navien model mentioned is not the specific model you own.


See page 38 of the CH Operation Manual regarding using an outdoor sensor with your Navien Combi Boiler model.
https://www.navieninc.com/downloads/ch-asme-operation-manual-en
Click to expand...

@Bannerman Thanks for this input, it's the first I had heard about it, despite reading about it in the manual.

I'll have to study what you wrote to figure that out for my situation.

Looking at the thermostat to see if there was a way to adjust the type of floor ( concrete slab or wood) but there isn't. Normally water temp runs 5-10*f over thermostat setpoint. Types of floor coverings have a max temp like hardwood 85* check with the manufacturer. Like Bannerman wrote turn the boiler setpoint down try 85* boilers are more efficient running than cycling. Since this combi water heater/ boiler is new to u they take yearly service look on utube how their cleaned on dhw side and where the filters. Heres a user's manual and can download others at this safe site.

Part of the issue seems to me would be so many thermostats. Your tubing should be sized for each room. One room loses 15k BTU you should have tubing to replace 15k btuh. That doesn't need a thermostat if the next room has the right amount of heat for its respective size and a thermostat. One thermostat should effectively control both of those rooms and really all of them. If you have every room set differently then your controller will tell your boiler to turn on and off a lot.

Don't use set backs. Hydronic heat uses radiation to heat every object in the house that's why it's so comfortable. Why would you cool everything in the house down and then spend the energy to heat it back up?

Hot air furnaces don't heat objects (they do but not efficiently or effectively). The reason you feel comfortable in a house with warm air is because your bathing in warm air. You turn the heat on, yay it's warm in here (no it's not). They can be ok with set backs because comfort isn't achieved in the same way.

I don't think I've heard of so many thermostats. Generally if you want a room cooler you turn the flow to that room down. Not the boiler.

@John Gayewski Interesting, thank you for the response. Turning the flow up/down vs the boiler, hmmmm. I get the concept. Here are some photos of my system. Thermostats go to the Wirsbo controller, which controls both the tubing valves for each zone as well as the boiler, I assume.

I will say that on the hydronic side, I can see the temperature go up to 120F when the Navien kicks on due to thermostat telling it to, and then most of the time the temperature will drop way down, as low as 60F when the unit is mostly off, like during the day time hours.

Sounds like the Navien should "always" be keeping the hydronic water at a high temp, and the thermostats should "only" control circulation. Am I hearing this right?

I think I would install an outdoor reset. It should help the cycling.

A quick update. I was observing, at night as temperatures drop, the Uponor thermostat in my largest zone click on, and then just minutes later, click off, and then on again, and off again. As if these Uponors just weren't forgiving enough / acting too "sensitive" for temperature fluctuation.

I replaced the thermostat with a standard Nest, and the behavior is much better. No quick on/off cycling, and at night it seems it clicks on, the Navien fires up, then runs on low for a few hours before shutting off.

Not the ideal behavior for radiant thermodynamics, etc, but much better than the frequent short cycling I was observing with the Uponor.

Thank you to everyone here on the thread sharing ideas. I appreciate the education.

Lower the heating water temperature to 90°.
You must log in or register to reply here.

Uponor zone module shows zone valves on, but not calling for heat