I need 3 new Toilets for a problem-child large sprawling 1 story home, with 2 toilets that require 2 flushes for solid waste. I suspect poorly designed drain line routing and long runs to reach the road. The current VITRA 1.6 gpf problem toilets from 2006 otherwise have no leaks or other problems.
*** I like projects that involve tweaking to produce better than expected results.
I have spot read your Forum and realize that you prefer the Toto line of toilets for a straight out of the box for a satisfactory experience. I am also aware of the various complaints and workarounds concerning the Champion 4 Flush Valve. So, I would like your advice about which of my ideas would produce the best Flush volume and velocity required to overcome sluggish drain lines in this home. Also, I’ve checked the home, and there are no drainage blockages.

The following is my criteria for any toilet choices:
*Champion or Toto Brand
*1.6 gpf
*One or Two piece would be okay, but since I plan to perform all 3 installs, I probably should go with a less expensive Two-piece..
*Elongated only
*ADA or Standard is okay 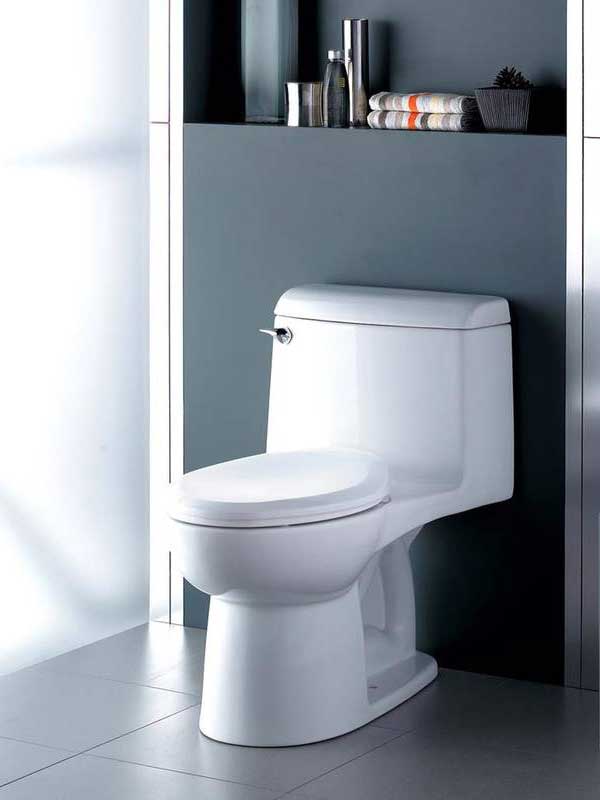 The following technical aspects are what I care about:
*The larger 2 3/8 inch Champion 4 trapway makes a lot of sense. A whole ¼ inch wider larger trapway with syphonic action can’t be ignored.
*But I worry about the complaints and design of the Champion 4 Flush Valve. Its Flapper Valve seal is visually in my opinion much too elevated above the Tank Bottom.
* Also, since the Flapper Valve Seal is quite elevated, it definitely concerns me that the Flush Valve Fill Tube at 7” tall seems too short and is not adjustable.

*The above explains why there are many complaints about:
*Too much water left in the Tank after each flush, not being used to improve Flush Volume and Velocity
*Complaints about Ghost Flushing likely caused by the reduced water hight pressure above the Flush Valve Flapper Seal. (i.e. not enough pressure to hold it down tight once it becomes a little dirty).

*However, it seems that all of the above Champion Flush Valve issues can be overcome in order to take advantage of its 2 3/8 inch trapway, which it seems would provide a big advantage for problem situations LIKE MINE.

So Here are My Questions:
Question #1: Which Champion 4, a One-piece version or a Two-piece version with Flush Valve modifications would be most advantageous?

Champion One-Piece Model:
*The One-piece Champion 4 Flush Valve appears in photos to have its Flapper Valve Seal a little closer to the Tank Bottom as compared to the 2 piece.
Question 2: Is there a height difference between the Champion 1 piece and 2 piece Flapper valve seal??

*With the One-piece model, modifications would be limited to:
-Extending Height of Flush Valve Fill Tube.
-Changing out the Flapper Seal with a heavier rubber seal from Korky.
-Replacing the stock Water Fill Valve with a taller one if needed to match the taller Fill Tube.
-The One-piece costs around $525—more expensive

Champion Two-piece Model:
*The Two-piece Champion 4 Flush Valve Flapper Seal appears in photos to be even higher up from the Tank Bottom than the One-piece model.
*With the Two-piece model, there would be additional possible modifications such as:
-The same ones listed above for the One-piece model, plus
-The whole stock Flush Valve could be exchanged for a large 3 inch version from:
*Korky
*Nuflush.com (newer company)
-Both the Korky and Nuflush versions allow for extending or adjusting upward to Fill Tube height.
-Both use heavier rubber flapper seals to prevent ghost flushing.
-The Two-piece has a big price advantage of only $249

Question #3 Concerning Champion Two-piece:
-Since everyone concurs that the Champion 4 Flush Valve tapers into a 3 inch Tank Hole Outlet, my specific question is:

*Question 3a: Is the Champion Two-piece Tank Hole diameter the same as the other 3 inch Tank Holes from American Standard such as the Cadet 3 Tank Hole?

Question #4: If you still believe based on your experience that a Toto Branded Toilet would still produce a more effective flush than a Modified Champion 4, then do you have any positive experiences with the Toto Model 1.6 gpf models listed below and do you recommend it instead of the Champion 4 with modifications (I do not mind mods) and which Champion 4 would you pick for modifying.

-Toto model MS854114SG ultramax, 1.6gpf,1 piece, elongated with special ceramic coating
-which also costs around $525 or more at the big box stores. or
-Toto model CST744SG Drake, 2 piece, elongates with special coating, 1.6gpf for only around $400.00
- the 2 piece Champion 4 with modifications would still be much less expensive than the other choices

Any feedback will be greatly appreciated.
Thanks, and sorry for the long post.
Deej
Last edited: Jun 15, 2021

I was never a fan of the Vitra toilets. 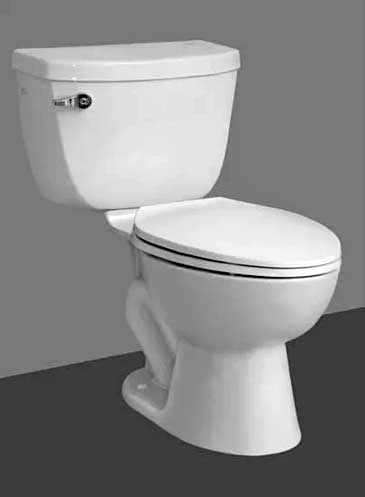 Let me think about what you wrote. Hmmmmmm
I've sold a few thousand toilets and installed many of those. I've also been working on and repairing toilets for 48 years.

If you want something with really good flushing beyond the bowl, like in the pipes, then a pressure assist is the way to go. It pushes waste further downline. The Kohler Highline with a Flushmate tank is really good.

For most that's not needed though. The newer gravity toilets have been working well. You might pick up one toilet first and see how you like it.
One of my old time customers, homes in Arizona and Washington was a big TOTO fan, and then read Consumers Reports and went with one-piece Champion 4's.
After two years he called me up and he went back to TOTO installing the Ultramax II's 1.28 GPF version. MS604114CEFG, Like them way better than the Champion 4.
I tossed two of the Champions and installed one of them for my neighbor that has never read my plumbing forums. If you don't know what you're missing, then who cares.

With any of the TOTO's, if you feel a hankering for more water you can always hold the handle a moment longer and flush with 3 gallons. They work plenty well with 1.28 gallons though.
Even the TOTO Entrada elongated, typically $180 out the door works really well.
The Drake II CST454CEFG is really nice too.
Last edited: Jun 15, 2021

It looks like AS finally might have their trapway design a bit smarter...the outlet now turns and projects straighter down the drain than earlier versions. Toto has had that right for decades. They used to try to turn a sharp 90-degree turn there, so larger diameter was almost required to prevent clogs, and it didn't always work!

I have no experience lately with quality control, but there were a lot of quality control issues with some AS toilets previously...maybe they've fixed that.

Toto uses more of an injection method of casting their toilets with 'dryer' clay...this helps control the shrinkage that always occurs with casting things with clay. Conventional methods always need to be larger molds than your ultimate size as it shrinks quite a bit as it dries out. Depending on the moisture content, the shrinkage can be anywhere from 4-15% or so, so a slight change can make a significant difference in the end result, making consistency harder to control.

It is not uncommon for solid waste to pause on its way out to the main line sewer and progressively move further with each flush or other discharge of water into the system. As Terry said, a pressure assist toilet moves it further initially, but after a bit, it still slows down and the solids can stop if they're no longer floating. That's why the slope is so critical.

Thank you for the feedback. I am aware of the consensus about better quality concerning the Toto and I tend to rather avoid the hassle of modifying the champion flush valve. I can tell from the lack of comments concerning the modifying questions that you would not go down that route. It would still be informative to have some answers to a few of my questions. Also, others who already own Champion 4's could benefit.

Otherwise, I am stuck on getting a 1.6gpf toilet and the only 2 Toto models that are available in my price range are the 2 models listed above. Also, I prefer to avoid more complicated technology such as pressure assisted. Simple most often breaks less often.

Do you mind commenting on the Toto 1.6 gpf model's listed above and for the sake of learning interesting approaches: which Champion 4 model, the 1 or 2 piece version would you pick on (if you had no choice) to modify right out of the box?
Thanks 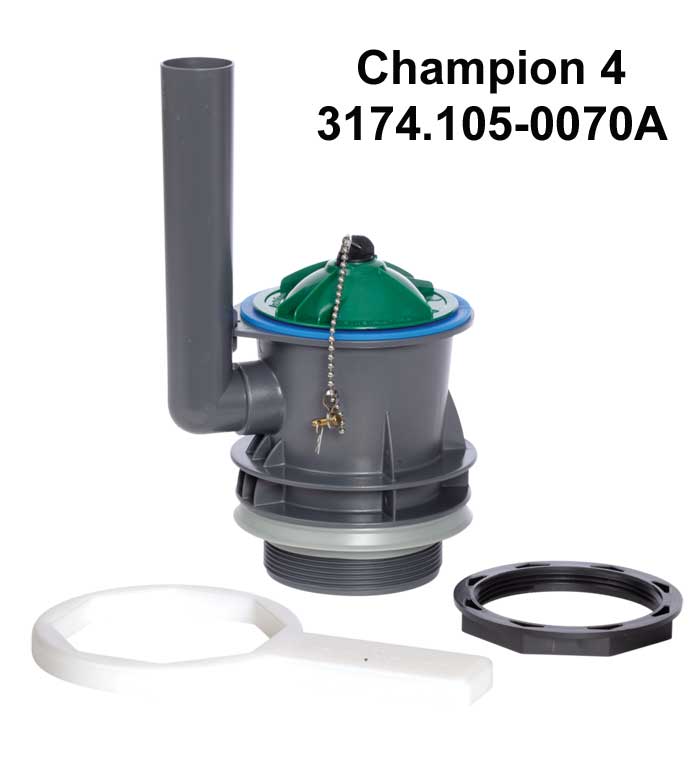 The height of the tower leaves a lot of water in the tank on a Champion.

If you want to modify a Champion, then get the two-piece and install the Korky flush valve replacement that uses a flapper in the tank. 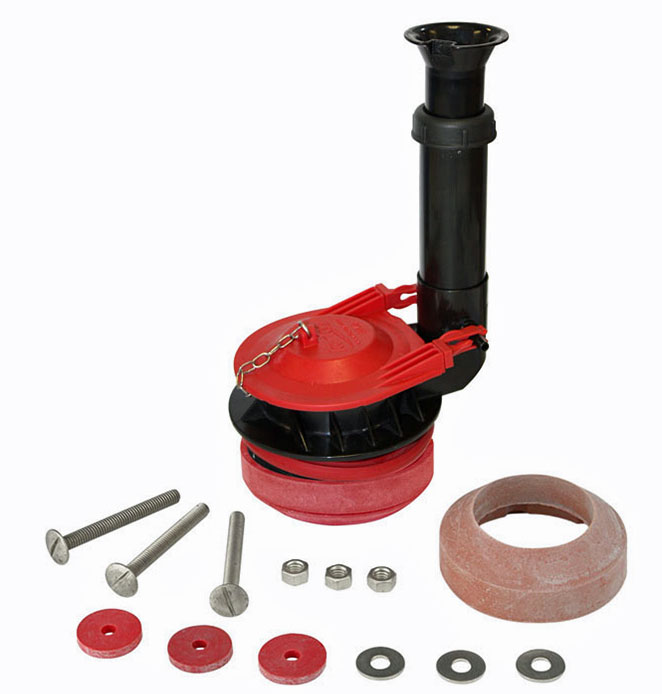 Do the 1.6 TOTO products work well? Yes.
Getting harder to find as more places are setting the limit at 1.28, which frankly I don't see as a problem. 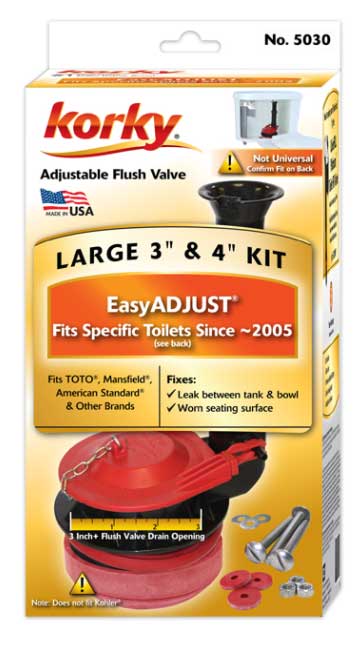