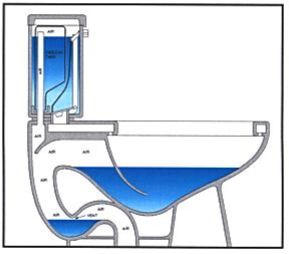 We've had an ADA model Briggs vacuity, elongated seat model, for about 2 years. It occaisionally clogs. Didn't take long to figure out that a plunger doesn't work on this model because the shape of the large drain in the bowl will not allow a plunger to seal. Also, the little bit of plunging action you do get, is vented up and out of that 1" white pipe in the fill tank -- water gushed up nearly a foot above the tank! (Capping that pipe temporarily prevents the gushing).

Beside the plunger, I also tried a snake. Going in through the bowl, the snake came UP through that 1" white pipe in the tank! Yikes. Then tried going straight down that 1" pipe, but the snake got stuck without unclogging anything.

The unclogging method that has worked (so far): 1. my wife stuffs a hand towel into the 3" hole in the bowl, and applies pressure on the towel to seal that big hole shut. 2. I use compressed air to blow out the clog, with an air-gun aimed down the 1" white tube in the tank -- sealing around the air gun with flexible modeling clay. Not as easy as a plunger, but it beats uninstalling the toilet to clear the clog. The Briggs Vacuity was Consumer Report’s top rated model, but they didn’t mention the clogging issue.

I’ve also had a Gerber Ultra-Flush (model 21-318 ADA, elongated bowl model), for several years. Although the Gerber is louder, I prefer it because it never clogs, and nearly always works on the first flush. (My wife didn't want a Gerber in our bedroom bath because of the loud flush.) The flushing action takes about 3 seconds, with a few more seconds to fill the bowl -- whatever was in the bowl is swished away in a roar of pressurized water.
Briggs Vacuity, rated a best buy, Consumer Reports
Last edited by a moderator: Apr 7, 2008
D

Please excuse me for being too lazy to read back and find the thread, but elsewhere on this site is a discussion of a much easier way to unclog a Briggs Vacuity. I also think that if you go to Briggs' website, there are detailed instructions on the proper method to successfully (and easily) plunge one.

From what I've been told, the newer pressure-assisted (Flushmate) toilets are more quiet than the older models. I put in one made by American Standard back in '97 and, even though it sounded like an explosion whenever flushed, it NEVER clogged.

The professionals on this site swear by the Totos, so in my upcoming remodel, I'm going to give those a shot. I'm beginning to think the biggest problem is that people just can't adjust to the fact that a gallon and a half of water is not going to adequately flush down a half roll of paper and all the other stuff that goes with it. I know a half roll is an exaggeration, but if you tend to use a lot of paper, you need to "flush as you go."

I've heard a few comments about the Vacuity, I gave one to my brother-in law for their cabin, but his kids kept plugging it.

There is only so much paper that any toilet will take down without problems.
Some of the problem is with the paper itself.
I'm finding that some papers use cotton for softness, which does not break down like paper made from wood products.

We've done very well with the G-Max Toto toilets, bearing in mind that with enough paper, (cotton being the worst) any thing you own can be plugged. 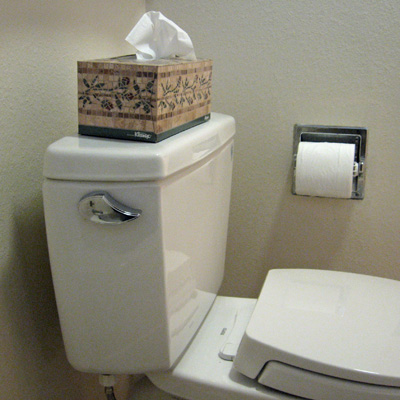 I've been using my new Toto Drake for about two weeks. I've never had any problem at all. It flushes very fast, not very loud, and never a clog. With my old 3.5 gal Mansfield toilet I had to flush twice and even then would get clogs a couple times a week. The Drake takes everything in one flush. I've been extremely pleased. Also, there is very little, if any, problem with bowl stains. The "material" zooms right out of the bowl--it doesn't "swirl" around, which causes stains. Hope that wasn't too graphic.

I would replace the toilet rather than deal with that horrible unclogging procedure. You should be able to get a Toto Drake. Believe me, the joy of never having to worry about plunging is easily worth it. Also saves guests the embarrassment of plugging up your toilet.
Last edited by a moderator: Feb 2, 2008

Location
Emails and phone calls sent in by readers

Our builder (big name, nationally recognized) uses Briggs in 90% of the homes they build and all I can say is these toilets are junk. As another wrote, no clogs but **frequently** requires a second flush. Boy, is that the truth. When we complained to our builder they told us to consider using single-ply bathroom tissue and don't use pre-moistened sanitary wipes!!! I'm very sorry but that's not our idea of any toilet we'd ever welcome into our home, least of all for the guest bathroom.
Bill G
You must log in or register to reply here.
Share:
Facebook Twitter Reddit Pinterest Tumblr WhatsApp Email Share Link
Top