Hey all, would really appreciate your time on this. Ran into a very helpful person for my plumbing questions and now I'm onto electrical. I'm DIY rewiring my bathroom/laundry with the following plan:

I have existing conduit that exits the house to the box that I'll probably run the vanity outlets and the heated floor through. I'll add another conduit line to run the washer and dryer through. I'll pay an electrician to hook up to my box and handle the conduit while I handle everything inside.

My questions:
- am I missing anything?
- after I rough in my boxes and run my wires to them, I plan to leave them near the wall that they'll exit until the electrician is ready to pull them. do you think they'll need the full length to reach the box or would they splice them and add a junction outside?

- A floor plan would help determine if you are missing anything. You haven't mentioned lighting. Lighting in the bathroom could be on the circuit with the vanity receptacles, or it could be on an additional circuit. Lighting in a laundry area that's not in the bathroom can't be on any of the circuits listed. In practice your heated floor circuit is likely to have enough headroom for lighting, but the manufacturer's instruction probably call for an individual circuit without any other loads.

- The vanity receptacles need GFCI protection, but that is provided by either the GFCI breaker or a GFCI receptacle, you don't need both.

- The 2020 NEC, in force in Colorado, now requires GFCI protection for the dryer. So you need a 30 amp double pole GFCI breaker.

- The only way that NM cable (Romex) can leave the house is directly into the back of an exterior enclosure mounted on the sheathing or siding. It can't run through exterior conduit; that's considered a wet location, and NM cable is not approved for wet locations.

So if your planned routing involves an exterior run from an enclosure to the panel, each circuit would need to be spliced in the enclosure to a wet location method. Or the home runs could be done in UF cable to avoid the splice.

Wayne! You seem to be a jack of all trades. Really appreciate you chiming in.

I've attached a floor plan to help illustrate the work. The top is West. Hopefully it's clear - washer and dryer outlets in bottom left, vanity outlets on either side of it, and the switch for the heated floor is to the right of the door.

- Lighting is on a separate circuit and will mostly be untouched. I only need to add a vanity light and a corresponding switch, which I'm hoping to add to the existing circuit.

- Noted on the GFCI, will stick to just the outlet

- Noted on the dyer breaker

- Good to know on the NM restrictions. I have been reading about this and it seemed unclear. So it sounds like I could use NM for all the interior wires, run them to an exterior mounted junction box, run a different cable from the JB to the main box in conduit. What is ideally used here? THHN or THWN, or something else?
-- Additionally, will I be able to run all of my wires into a single 4x4 JB and conduit? My understanding is 9 hot wires in the conduit, which I would be exactly at with this configuration. 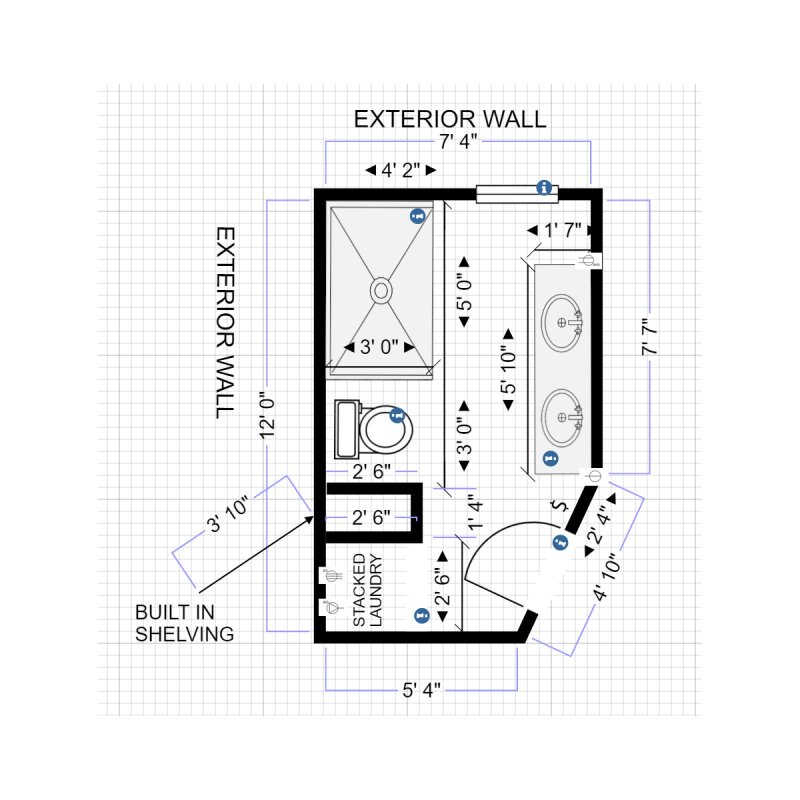 The upshot is it is a bit more complicated that you suggested, and it may be a better practice not to put all 4 circuits in one conduit.

The washer needs a GFCI & AFCI.

The upshot is it is a bit more complicated that you suggested, and it may be a better practice not to put all 4 circuits in one conduit.

There is already conduit from the box to the exterior wall of the bathroom. Going through the house would be difficult. It's 130+ years old the box is located in a place where it's difficult to reach from the inside.

This is a pic of the exterior wall. The top right window is the bathroom and you can see the conduit going to it under the window. 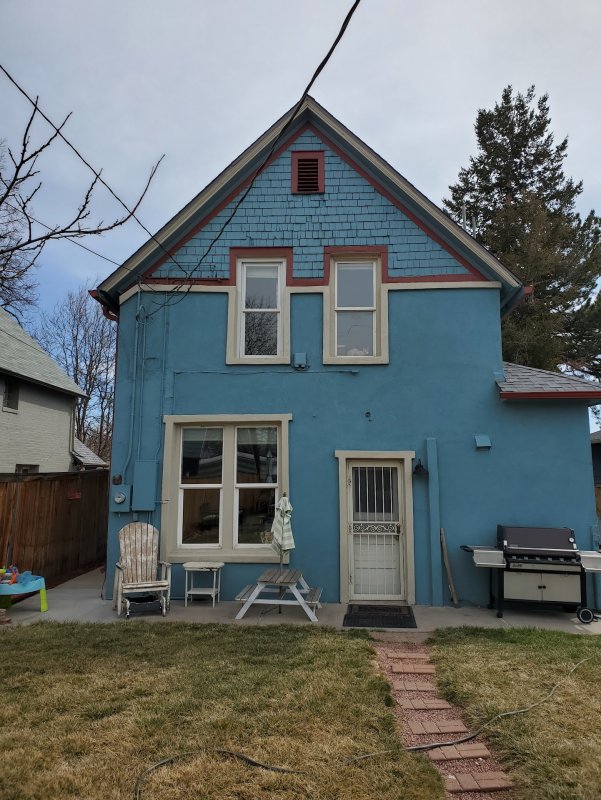 The conduit logic is confusing, to say the least. I suppose from my perspective, it would be good to know if I should be running all my circuits through the same box or if they'd need to be split up. I'll let the electrician deal with the rest.

Thanks, I'll note that. Is there typically a preference for using it in a breaker vs all in an outlet?

webdood90 said:
There is already conduit from the box to the exterior wall of the bathroom. Going through the house would be difficult. It's 130+ years old the box is located in a place where it's difficult to reach from the inside.
Click to expand...

OK, so each circuit needs to have an exterior run and an interior run. If the exterior run is in conduit, and you don't want to run conduit to the first box of each circuit, then you'll need to splice from an exterior method to NM cable. [Or you could install a huge conduit and pull UF cables through it on the exterior, but that would be unusual.]

In the conduit you'll want THWN-2, particularly if you are going to put all 4 circuits into it. You could pull 6 #12s and 4 #10s in 3/4" EMT, and the fill ratio would be a bit over 30%. If the junction box for the splices is right on the outside of the wall and you bring your NM cable into the back of the box, that's fine.


webdood90 said:
Thanks, I'll note that. Is there typically a preference for using it in a breaker vs all in an outlet?
Click to expand...

AFCI protection has to be at the breaker, absent some extra measures, like running conduit to the first box and putting an AFCI receptacle there. GFCI controls have to be readily accessible, so if your washer receptacle is going to be behind the laundry stack, and there are no other outlets on the circuit, you'd need to have that at the breaker, i.e a "dual function" AFCI/GFCI breaker.

But you could add a second laundry outlet just next to laundry stack, in a location not blocked by the laundry stack, and call it your ironing outlet. That would let you put the GFCI there and protect the inaccessible outlet from it. Or you could put a blank face GFCI there.

There is sure is a lot of pipe on the rear wall. Is the box next to the meter a breaker panel? Is there another breaker panel else where? What is the amperage of the main breaker? 100 amp, 150 amp or 60 amp? I guessing it is 100 amp. Adding electric floor heating you need to be sure your load doesn't exceed the breaker panel, A 100 amp panel you should be OK.

Wayne makes the best suggestion to place the washer outlet to the side of the washer so you have access to the GFCI reset/test button or add an outlet behind the washer branched off the GFCI.

Thanks guys. Will take all of that into consideration with my work.

I'm just about finished roughing out my outlets and I've made a really concerning discovery. I need to add a switch and vanity light to this room, so I went up to the attic to see about splicing a new branch off of the line to the bathroom. I found that everything up there is 14 gauge, and it's on a 20 amp circuit.

Now I'm wondering what to do. How dangerous is this state? I can't imagine I'd be able to get my work to pass inspection when the entire circuit I'm adding onto is wired incorrectly.

Sufficiently wrong to require correction regardless of difficulty.

Thought I had a bad GFCI but something else is going on - Help!

Questions re Efficient placement of main and subpanel