Hi everyone. First-timer on this forum. I've done some light plumbing DIY projects in the past, but not a complete bathroom. First time dealing with drains and venting.

I showed this picture to a local plumber, and he said in Ohio I should be able to configure the plumbing for the 3 fixtures (sink, toilet, shower) as specified in the picture and it becomes a wet vent system. (Assume all connections have couplers or connectors where needed).

The only other question I have is would I have to insert a clean-out on the 3" stack of the rough-in underneath the sanitary tee?

Wanted to run this question by a public forum to see if anyone else out there has any other suggestions. I am trying to keep this as simple as possible. I added the original photo so contributors can markup that copy and share their ideas. 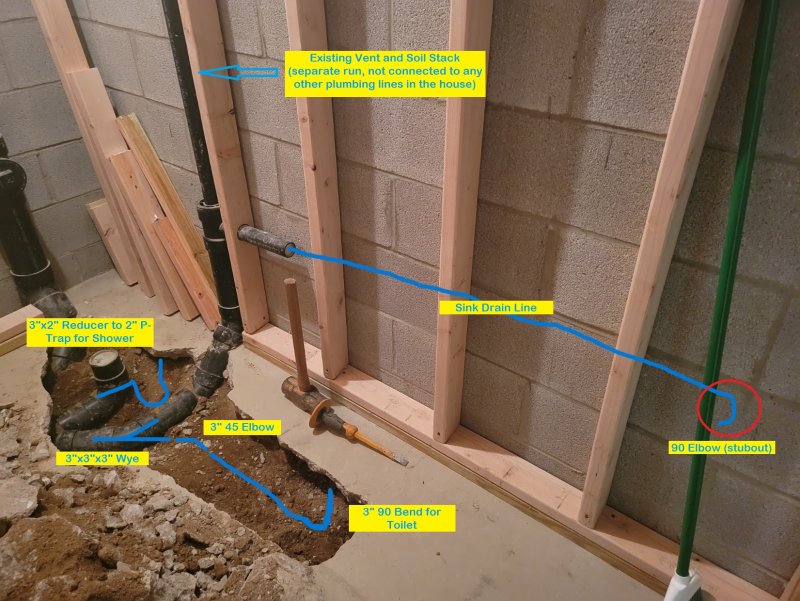 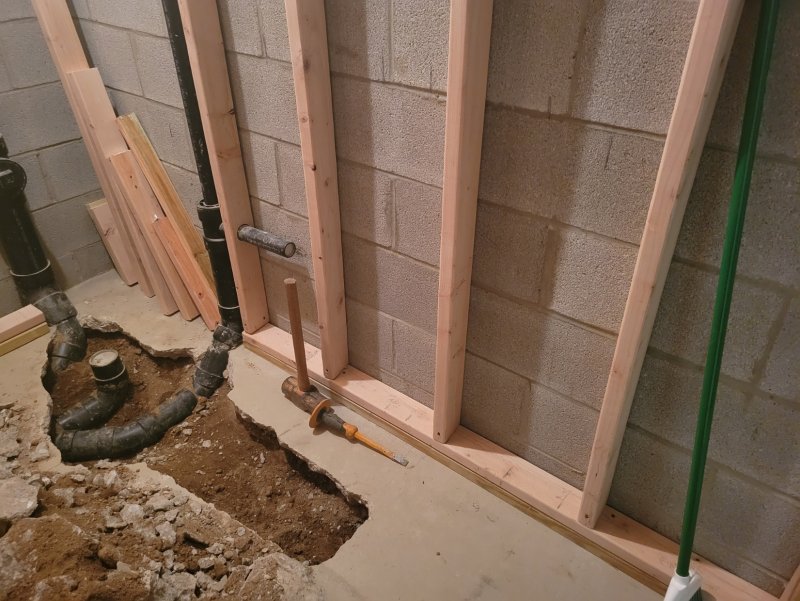 If the line labeled "existing vent and soil stack" is just a vent and has nothing draining into it, then the connectivity works. A few comments:

- If your shower is in the corner, how is the existing cleanout at the left edge of the picture going to be accessible?

- Not sure if a new 3" cleanout is required, but it would be a good idea.

wwhitney said:
If the line labeled "existing vent and soil stack" is just a vent and has nothing draining into it, then the connectivity works. A few comments:

- If your shower is in the corner, how is the existing cleanout at the left edge of the picture going to be accessible?

- Not sure if a new 3" cleanout is required, but it would be a good idea.

Thanks for the response Wayne.

The existing cleanout on the left edge will be accessible through a cover plate that I am going to incorporate into the shower design. Since it's a basement bathroom, I'm not too concerned about the aesthetics.

The lav trap run is just a bit over 4', so I think I should be good there.

If I add a new 3" cleanout I will have to add another access plate. I'll have to think this one over.

Access panels in a shower wall other than the valve wall would be best avoided, as they interrupt the continuous waterproofing and could leak. Perforations in the valve wall waterproofing are an accepted necessary compromise (e.g. for the valve trim) as the shower head will be pointed away from that wall. This assumes "valve wall" = "wall with showerhead on it."

If the wall framing is all non-structural and just to hold insulation and the wall finish, and if you can secure cut stud ends to the block wall, then you could run 3" lines horizontally in the stud walls. E.g. replace the lav san-tee with a 3" san-tee so that you can put a 3" cleanout outside the shower, behind the WC. And replace the existing cleanout with a combo that goes to the left to proceed to outside the shower area.

On the lav wall, you also have the option to reroute the drains in the slab to come up outside the shower perimeter, and then just jog the vent back to the existing stud bay high up in the wall (at least 6" above the lav flood rim). You could potentially do something similar for the existing cleanout.

This is how the stacks looked before I broke the concrete.

How would I relocate the clean-outs so they are outside the shower perimeter? 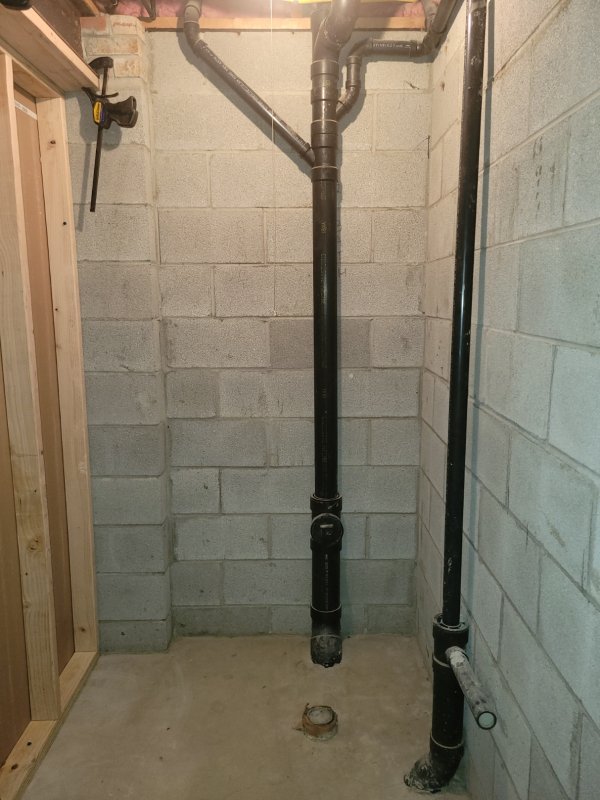 Depends on what the shower perimeter is going to be, and which wall is the valve wall.

Easiest would be to make the wall with cleanout the valve wall, and use some sort of watertight access panel over the existing cleanout. Otherwise, if the shower is extending to the wall on the left, and the cleanout out can stick out the wall out the drywall, and you can figure out the framing to allow a horizontal 3" pipe, you'd replace the cleanout with a combo and run horizontally to the drywall, with a little jog around the jog in the block wall. Not the best.

You could also consider relocating the shower.