I apologize in advance if I'm lacking so of the vocabulary/knowledge to accurately describe my situation. I own a two story, 1800 sqft, American Foursquare duplex in Northern Michigan where I rent out the lower two units and have my office in the semi-finished unconditioned attic. The coldest it gets around here is zero Fahrenheit sustained for about a week, but springs and autumns linger in the 50s for a month or two. I upgraded the boiler/hot water two years ago to a Weil-Mclain 97+110 / Weil-Mclain Aqua Plus 45 combo without realizing that the boiler was a bit overblown for what my two zoned system needed.

My hydronic system is old. Large cast iron radiators and pipes are scattered across the duplex, and I pulled off the asbestos wraps in the basement last year to increase the load seen by the boiler when firing. The basement is significantly warmer now.

Currently its in the teens outside, the modcon boiler is firing for 30+ minutes with a target temp of 180F, a supply temp of 138F, and a return temp of 110F about midway through the cycle. I'd like to get the return temp colder, as this is peak winter about now and I know in spring and autumn that the return temps are not coming back at condensation temperatures. 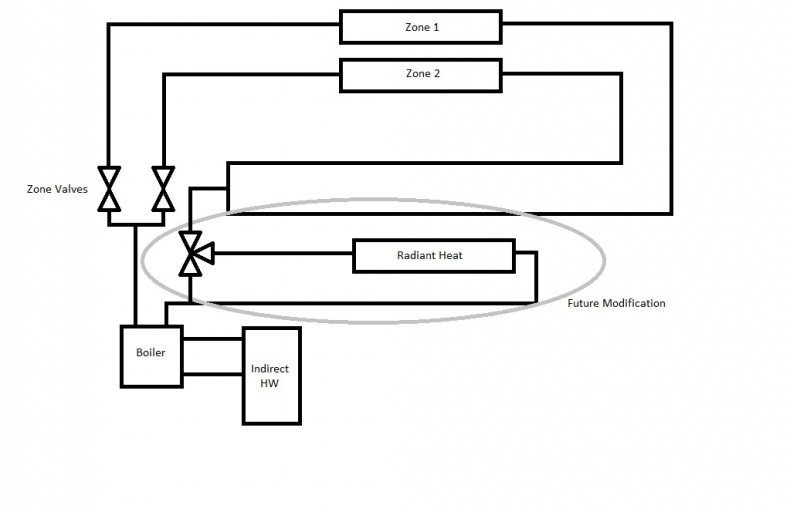 I imagine my system looking something like this. I'm not really concerned with controlling the radiant heat zone, as my idea is to just use it condition the attic, a sun room, and the bathroom floors in the two units, and scavenging heat from the other two zones is good enough. A three-way valve with a temperature sensor to control the loop is what I'm interested in. The zone will probably be 1000+ feet of PEX routed up to the attic and back down to the basement. I realized the proper way to do this is to add a third zone with a mixer, but I'd like to implement the KISS method if it's possible. If this is a horrible idea please let me know.
Last edited: Jan 16, 2019
You must log in or register to reply here.

Control two actuators as one zone?